Tang Yitian has been living in America for almost a decade when he receives an urgent phone call from his mother: his father has disappeared from the family’s rural village in China. Though they have been estranged for years, Yitian promises to come home.

When Yitian attempts to piece together what may have happened, he struggles to navigate China’s impenetrable bureaucracy as an outsider, and his mother’s evasiveness only deepens the mystery. So he seeks out a childhood friend who may be in a position to help: Tian Hanwen, the only other person who shared Yitian’s desire to pursue a life of knowledge. As a teenager, Hanwen was “sent down” from Shanghai to Yitian’s village as part of the country’s rustication campaign. Young and in love, they dreamed of attending university in the city together. But when their plans resulted in a terrible tragedy, their paths diverged, and while Yitian ended up a professor in America, Hanwen was left behind, resigned to life as a midlevel bureaucrat’s wealthy housewife.

Reuniting for the first time as adults, Yitian and Hanwen embark on the search for Yitian’s father, all the while grappling with the past—who Yitian’s father really was, and what might have been. Spanning the late 1970s to 1990s and moving effortlessly between rural provinces and big cities, A Map for the Missing is a deeply felt examination of family and forgiveness, and the meaning of home. 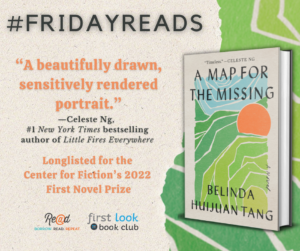 #FridayReads: A Map for the Missing

Category: #FridayReads
Tagged with:#FridayReads, A Map for the Missing
0
79 views

Click to Read an Excerpt on First Look. Listen to a Clip from the Audiobook. Watch Isabel Cañas on the Spring Book & Author Festival Horror Panel. During the overthrow of the Mexican government, Beatriz’s father was executed and her home destroyed. When handsome Don Rodolfo Solórzano proposes, Beatriz ignores the rumors surrounding his first […]

Click to Read an Excerpt on First Look. Listen to a Clip from the Audiobook. Peter Armstrong and Hank Colfax are best friends, but their lives couldn’t be more different. Peter, the local pastor who is dedicated to his community, spending time visiting the flock, attending meetings, and, with the holiday season approaching, preparing for the Christmas […]

Click to Read an Excerpt on First Look. Listen to a Clip from the Audiobook. Watch Tomi Obaro on Our Relationship Fiction Panel. Funmi, Enitan, and Zainab first meet at university in Nigeria and become friends for life despite their differences. Funmi is beautiful, brash, and determined; Enitan is homely and eager, seeking escape from […]

Click to Read an Excerpt on First Look. Listen to a Clip from the Audiobook. View or Download the Book Club Kit Here. “I could just kill you right now!” It’s something we’ve all thought at one time or another. But Ruby has actually acted on it. Three times, to be exact. Though she may be […]