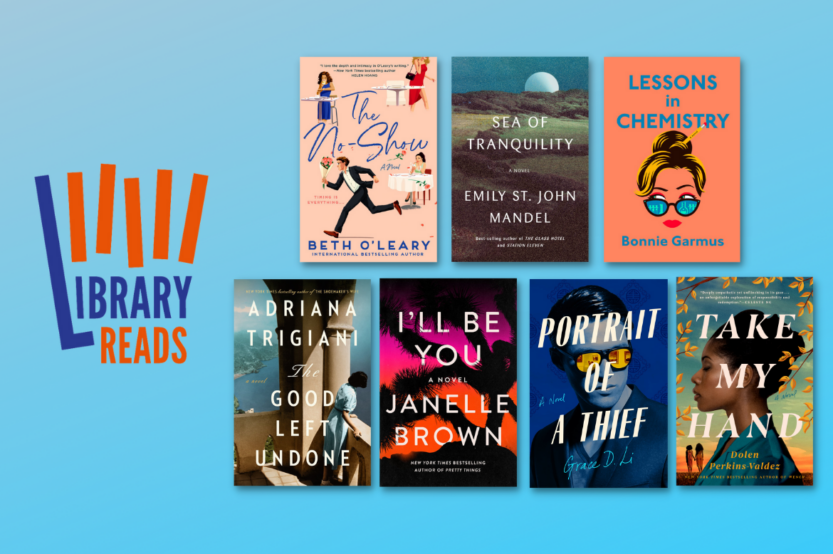 Public library staff across the nation have spoken! Congratulations to the books selected for the April 2022 LibraryReads Top Ten List.

Click to Request eGalleys to Prepare for Your April Readers’ Advisory.

A must-read debut novel! Meet Elizabeth Zott: a one-of-a-kind scientist in 1960s California whose career takes a detour when she becomes the star of a beloved TV cooking show.

“In the 50s and early 60s when women were viewed as little more than chattel for men’s convenience, Elizabeth Zott had the temerity to become a chemist. With complex and wonderful characters, her story is funny, sad, enraging, hopeful, and will have readers cheering for every character and all women everywhere. For fans of Where’d You Go Bernadette?, The Rosie Project, and Eleanor Oliphant Is Completely Fine.” Lessons in Chemistry: A Novel by Bonnie Garmus (Doubleday) —Judy G. Sebastian, Eastham Public Library, Eastham, MA NoveList read-alike:

From Adriana Trigiani, “a master of visual and palpable detail” (The Washington Post), comes a lush, immersive novel about a hardworking family of Tuscan artisans with long-held secrets. Epic in scope and resplendent with the glorious themes of identity and belonging, The Good Left Undone unfolds in breathtaking turns.

“Following the lives of various generations of the Cabrelli family, Trigiani takes readers through the 1920s, World War II, and modern-day Italy and Scotland. With descriptive language and well-drawn characters, each generation’s story is woven seamlessly into the next. For fans of Love and Ruin and The Guest Book.”—Janet Makoujy, New City Library, New City, NY I’ll Be You by Janelle Brown

Two identical twin sisters and former child actors have grown apart—until one disappears, and the other is forced to confront the secrets they’ve kept from each other in this twisty suspense novel from the New York Times bestselling author of Pretty Things.

“Sam and Elli, identical twin sisters and former television stars, have their issues. Sam is a recovering addict, and Elli has been taken in by a cult. But they are quite likable, and the story is totally engaging, a bit suspenseful, and includes well developed plot points. Give to fans of The Good Sister.” —Evelyn Cunningham, Norwalk Public Library, Norwalk, CT

NoveList read-alike: Until We Are Lost by Leslie Archer

Portrait of a Thief by Grace D. Li

Ocean’s Eleven meets The Farewell in Portrait of a Thief, a lush, lyrical heist novel inspired by the true story of Chinese art vanishing from Western museums; about diaspora, the colonization of art, and the complexity of the Chinese American identity.

“Li’s debut novel is a fun heist book focusing on five Chinese-American college students recruited to steal artwork from Western museums and return them to China. The book looks at issues of diaspora, colonization, and the character’s different relationships with culture and identity. Give to readers who liked The Verifiers and Skin Deep.”—Allie Williams, Camarillo Library, Camarillo, CA Take My Hand by Dolen Perkins-Valdez

A searing and compassionate new novel about a young Black nurse’s shocking discovery and burning quest for justice in post-segregation Alabama, from the New York Times bestselling author of Wench.

“A well-paced, wrenching book about the reproductive rights of Blacks and the poor in the mid-20th century. The story moves back and forth in time with fully drawn characters, giving the reader a view of the consequences of the health care system’s policies and fresh outrage at the wrongs perpetrated upon Black women. For readers of Celeste Ng and Rebecca Skloot.”—Leona Arthen, The Worthington Library, Worthington, OH
NoveList read-alike: The No-Show by Beth O’Leary

Just when you thought it was safe to go back into the teahouse. . . .

“It’s Valentine’s Day, and three women are stood up–by the same guy. The story is told from the perspectives of the women, and their stories weave together seamlessly. The characters are delightful! Sure to please both existing fans and those new to this author.” —Karen Clements, Lake Villa District Library, Lindenhurst, IL Just when you thought it was safe to go back into the teahouse. . . .

“In 2400, Gaspery works at the Time Institute where he investigates the nature of reality. This book pieces together the human experience beautifully. A compelling read for time travel and sci-fi fans. The characters and insights about living through a pandemic made this a page turner! For fans of Cloud Cuckoo Land and Recursion.” —Andie Conn, Mid-Continent Public Library, Kansas City, MO

For more information about the program, or to learn how to vote for your favorite upcoming books, visit LibraryReads.org. And, don’t forget, voting for the May LibraryReads list ends 4/1!

Check out which May titles we’re loving.

Public library staff across the nation have spoken! Congratulations to all the books selected for the October 2021 LibraryReads Top Ten List. Click to Request eGalleys to Prepare for Your October Readers’ Advisory. Click to Learn More About our LibraryReads picks on Audio. The Lincoln Highway: A Novel by Amor Towles The bestselling author of A […]

Public library staff across the nation have spoken! Congratulations to all the books selected for the April 2021 LibraryReads Top Ten List. Click to Request eGalleys to Prepare for Your April Readers’ Advisory. Click to Learn More About our LibraryReads picks on Audio.   The Intimacy Experiment by Rosie Danan “Having built the Shameless platform […]

Public library staff across the nation have spoken! Congratulations to the books selected for the December 2021 LibraryReads Top Ten List. Click to Request eGalleys to Prepare for Your December Readers’ Advisory. Click to Learn More About our LibraryReads picks on Audio. The Love Con by Seressia Glass He’s cosplaying as her boyfriend but their feelings […]

Our 2021 ALA Award Winners and Honorees

The 2021 literary awards calendar got underway last week with the announcement of the Andrew Carnegie Awards, and many more. We proudly congratulate all of our award-wining authors. Select the titles below to access audio clips, excerpts, reading guides, and more. The Andrew Carnegie Medal for Excellence in Fiction Deacon King Kong: A Novel by James […]