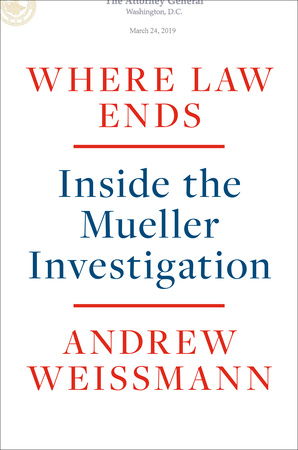 In the first and only inside account of the Mueller investigation, one of the special counsel’s most trusted prosecutors breaks his silence on the team’s history-making search for the truth, their painstaking deliberations and costly mistakes, and Trump’s unprecedented efforts to stifle their report.

“WHERE LAW ENDS TYRANNY BEGINS”—John Locke, inscribed on the wall of DOJ headquarters in Washington, D.C.

In May 2017, Robert Mueller was tapped to lead an inquiry into Russian interference in the 2016 presidential election, coordination by foreign agents with Donald Trump’s campaign, and obstruction of justice by the president. Mueller assembled a “dream team” of top prosecutors, and for the next twenty-two months, the investigation was a black box and the subject of endless anticipation and speculation—until April 2019, when the special counsel’s report was released.

In Where Law Ends, legendary prosecutor Andrew Weissmann—a key player in the Special Counsel’s Office—finally pulls back the curtain to reveal exactly what went on inside the investigation, including the heated debates, painful deliberations, and mistakes of the team—not to mention the external efforts by the president and Attorney General William Barr to manipulate the investigation to their political ends.

Weissmann puts the reader in the room as Mueller’s team made their most consequential decisions, such as whether to subpoena the president, whether to conduct a full financial investigation of Trump, and whether to explicitly recommend obstruction charges against him. Weissmann also details for the first time the debilitating effects that President Trump himself had on the investigation, through his dangling of pardons and his constant threats to shut down the inquiry and fire Mueller, which left the team racing against the clock and essentially fighting with one hand tied behind their backs.

In Where Law Ends, Weissmann conjures the camaraderie and esprit de corps of the investigative units led by the enigmatic Mueller, a distinguished public servant who is revealed here, in a way we have never seen him before, as a manager, a colleague, and a very human presence. Weissmann is as candid about the team’s mistakes as he is about its successes, and is committed to accurately documenting the historic investigation for future generations to assess and learn from. Ultimately, Where Law Ends is a story about a team of public servants, dedicated to the rule of law, tasked with investigating a president who did everything he could to stand in their way.

Drop-In Alert: Where the Law Ends: Inside the Mueller Investigation by Andrew Weissmann

“Intimations captures the uneasiness of our modern moment as Smith reflects on the COVID-19 pandemic and relates it to issues of privilege and inequity. Her urgent voice tackles everything from what becomes important during isolation to the global response to George Floyd’s killing. The author asks questions, both timely and timeless, about how we respond to […]

Public library staff across the nation have spoken! Congratulations to all the books selected for the January 2018 LibraryReads Top Ten List! Click to Prepare for Your January Readers’ Advisory. The Immortalists (#1) By Chloe Benjamin “A thought-provoking, sweeping family saga set in New York City’s Lower East Side, 1969. Four siblings sneak out to visit a […]

All the Best People by Sonja Yoerg

Hitting shelves next week! From the author of The Middle of Somewhere and House Broken, All the Best People is an intricately crafted story of madness, magic, and misfortune across three generations. Vermont, 1972. Carole LaPorte has a satisfying, ordinary life. She cares for her children, balances the books for the family’s auto shop and laughs when her […]