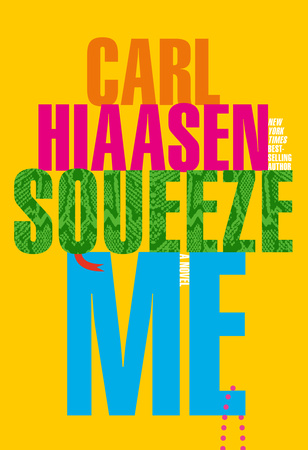 From the bestselling author of Skinny Dip and Razor Girl, a hilarious new novel of social and political intrigue, set against the glittering backdrop of Florida’s gold coast.

It’s the height of the Palm Beach charity ball season: for every disease or cause, there’s a reason for the local luminaries to eat (minimally), drink (maximally), and be seen. But when a prominent high-society dowager suddenly vanishes during a swank gala, and is later found dead in a concrete grave, panic and chaos erupt. Kiki Pew was notable not just for her wealth and her jewels–she was an ardent fan of the Winter White House resident just down the road, and a founding member of the POTUSSIES, a group of women dedicated to supporting their President. Never one to miss an opportunity to play to his base, the President immediately declares that Kiki was the victim of rampaging immigrant hordes. This, it turns out, is far from the truth.

The truth might just lie in the middle of the highway, where a bizarre discovery brings the First Lady’s motorcade to a grinding halt (followed by some grinding between the First Lady and a love-struck Secret Service agent). Enter Angie Armstrong, wildlife wrangler extraordinaire, who arrives at her own conclusions after she is summoned to the posh island to deal with a mysterious and impolite influx of huge, hungry pythons . . .

Carl Hiaasen can brighten even the darkest of days and Squeeze Me is pure, unadulterated Hiaasen. Irreverent, ingenious, and highly entertaining, Squeeze Me perfectly captures the absurdity of our times.

#FridayReads: The Adults by Caroline Hulse

A couple, now separated. Their daughter. Their new partners. One epic Christmas vacation. What could go wrong? This razor-sharp novel puts a darkly comic twist on seasonal favorites like Love Actually and The Holiday. Claire and Matt are no longer together but decide that it would be best for their daughter, Scarlett, to have a “normal” family Christmas. They […]

One of Entertainment Weekly’s and SheReads’ books to read after The Handmaid’s Tale Set in an America where half the population has been silenced, VOX is the harrowing, unforgettable story of what one woman will do to protect herself and her daughter. On the day the government decrees that women are no longer allowed more than […]

The incredible, poignant true stories of victims of a notorious adoption scandal—some of whom learned the truth from Lisa Wingate’s bestselling novel Before We Were Yours and were reunited with birth family members as a result of its wide reach From the 1920s to 1950, Georgia Tann ran a black-market baby business at the Tennessee Children’s Home […]