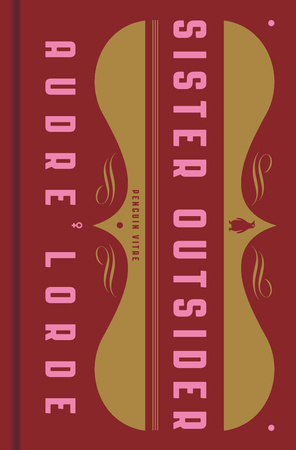 “Sister Outsider‘s teachings, by one of our most revered elder stateswomen, should be read by everyone.” -Essence

In this charged collection of fifteen essays and speeches, Lorde takes on sexism, racism, ageism, homophobia, and class, and propounds social difference as a vehicle for action and change. Her prose is incisive, unflinching, and lyrical, reflecting struggle but ultimately offering messages of hope.

The groundbreaking feminist’s timely collection of nonfiction writings on race, gender, and LGBTQ issues is now for the first time in Penguin Classics as part of the Penguin Vitae series, with a foreword by poet Mahogany L. Browne.

Penguin Classics launches a new hardcover series with five American classics that are relevant and timeless in their power, and part of a dynamic and diverse landscape of classic fiction and nonfiction from almost seventy-five years of classics publishing. Penguin Vitae provides readers with beautifully designed classics that have shaped the course of their lives, and welcomes new readers to discover these literary gifts of personal inspiration, intellectual engagement, and creative originality.

Superstar Memoirs for Your Younger Patrons

Between a pop star and former One Direction member and a superstar male teen model, we have two books sure to excite your younger readers. Gorgeously designed with hundreds of full-color photographs and ZAYN’s notes, drawings, song lyrics, and personal stories, the book captures ZAYN’s most private moments and his candid feelings on fame, success, music, […]

Start 2019 off right with these book club reads! Click for Even More Book Club Reads.   Want more content like this? Click below to subscribe to our weekly eNewsletter to discover the hottest upcoming books that will drive your holds lists and get access to exclusive giveaways, excerpt samplers, programming tips, and much more!

Whether they are crafters, sewers, or people who just want to bring a little style to their life, these books can help your patrons get their DIY-on. Click for More Lifestyle Books.