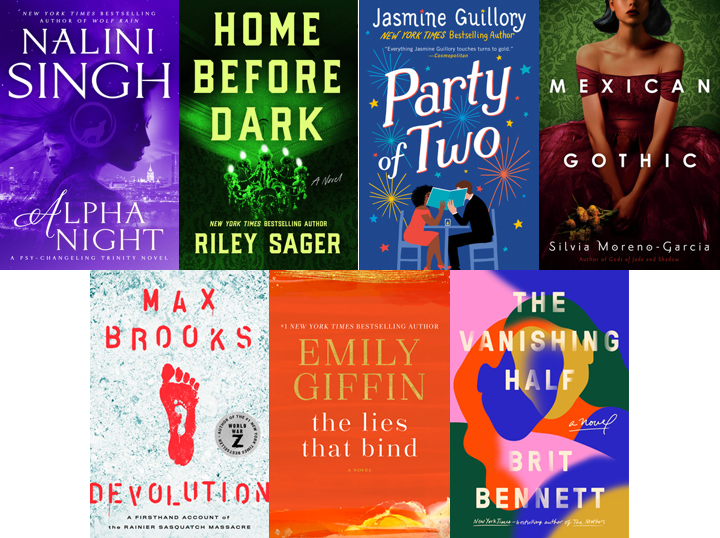 Public library staff across the nation have spoken! Congratulations to all the books selected for the June 2020 LibraryReads Top Ten List, including the Top Pick Mexican Gothic by Silvia Moreno-Garcia!

Alpha Night by Nalini Singh
“This continuation of the Psy-Changeling series features the shapeshifting wolves of Moscow and their pack alpha, Selenka, but it also brings back many characters from previous books. Another enjoyable, fast-paced paranormal romance from Singh.” —Cathy Shields, East Lyme Public Library, Niantic, CT

Home Before Dark by Riley Sager
“Maggie’s father wrote a famous book about the family’s paranormal experiences when she was a child living at Baneberry Hall. Twenty-six years later she returns to the house to finally face what happened long ago. This suspenseful and compelling book keeps you guessing to the very end.” —Ashley Borer, Normal Memorial Library, Fayette, OH

Read-alikes: The Family Upstairs by Lisa Jewell, The Missing Years by Lexie Elliott, and The Invited by Jennifer McMahon

Party of Two by Jasmine Guillory
“In the fifth book of the Wedding Date series, sparks fly between a smart, independent lawyer and a charming, impulsive senator. Guillory thoughtfully incorporates serious issues into her books while keeping the tone light and uplifting. Sweet, sexy, and a lot of fun.” —Jayme Hughes-Gartin, Public Library of Cincinnati and Hamilton County, Cincinnati, OH

Read-alikes: A Duke by Default by Alyssa Cole, Rumor Has It by Cheris F. Hodges, The Bride Test by Helen Hoang, and The Unhoneymooners by Christina Lauren

Mexican Gothic by Silvia Moreno-Garcia
“A perfect gothic mystery with an updated sensibility that will appeal to the modern reader. Noemí is a Mexico City socialite in the 1950s. When her father receives a disturbing letter from his niece, he sends Noemí to check on her cousin at the remote house where she is living–a grotesque and rotting English-style mansion, built on dirt imported from England by the colonialist eugenicist family she has married into. Lush descriptions and the creepy atmosphere make this a good choice for readers who liked The Witch Elm, The Little Stranger, or The Haunting of Hill House.”—Lorena Neal, Evanston Public Library, Evanston, IL

Devolution by Max Brooks
“Nobody imagines the end of the world quite like Brooks! Here he takes a group of privileged idealists, sets them in a beautiful utopia where they can escape the headaches of the city but suffer none of the inconveniences, and then brutally removes all the comforts they expect to be delivered. Throw in some hungry Sasquatch and things get really interesting. For fans of Blake Crouch and Jeff VanderMeer.” —Amy Hall, Jefferson County Public Library, Wheat Ridge, CO

The Lies That Bind by Emily Giffin
“Cecily is fresh off a break up and meets a ‘too good to be true’ stranger in a local dive bar. For fans of Me Before You by JoJo Moyes.” —Stephanie Hall, Topeka Public Library, Topeka, KS

The Vanishing Half by Brit Bennett
“Centering on two twin light-skinned black girls who grew up in a strange town in the Jim Crow south, this book explores racism, colorism, sexism, and familial relationships through the interweaving storylines of vivid and complicated characters. For fans of Red at the Bone by Jacqueline Woodson.” —Pamela Gardner, Medfield Public Library, Medfield, MA

NoveList read-alike: A Kind of Freedom by Margaret Wilkerson Sexton

For more information about the program, or to learn how to vote for your favorite upcoming books, visit LibraryReads.org. And, don’t forget, voting for the July LibraryReads list ends 6/1!

A fresh and imaginative retelling of the Rumpelstiltskin fairytale from the bestselling author of Uprooted, called “a very enjoyable fantasy with the air of a modern classic” by The New York Times Book Review. Miryem is the daughter and granddaughter of moneylenders, but her father is not a very good one. Free to lend and reluctant to […]

Click to Read an Excerpt on First Look. From the New York Times bestselling author of Uprooted and Spinning Silver comes the story of an unwilling dark sorceress who is destined to rewrite the rules of magic. “The dark school of magic I’ve been waiting for.” Katherine Arden, author of Winternight Trilogy Click for eBook Information. Click for Audiobook Information. Reqeuest […]