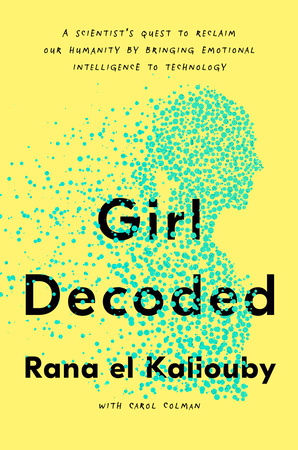 In a captivating memoir, an Egyptian American visionary and scientist provides an intimate view of her personal transformation as she follows her calling—to humanize our technology and how we connect with one another. See below for a book club kit and shareable quote cards!

“A vivid coming-of-age story and a call to each of us to be more mindful and compassionate when we interact online.”—Arianna Huffington

Rana el Kaliouby is a rarity in both the tech world and her native Middle East: a Muslim woman in charge in a field that is still overwhelmingly white and male. Growing up in Egypt and Kuwait, el Kaliouby was raised by a strict father who valued tradition—yet also had high expectations for his daughters—and a mother who was one of the first female computer programmers in the Middle East. Even before el Kaliouby broke ground as a scientist, she broke the rules of what it meant to be an obedient daughter and, later, an obedient wife to pursue her own daring dream.

After earning her PhD at Cambridge, el Kaliouby, now the divorced mother of two, moved to America to pursue her mission to humanize technology before it dehumanizes us. The majority of our communication is conveyed through nonverbal cues: facial expressions, tone of voice, body language. But that communication is lost when we interact with others through our smartphones and devices. The result is an emotion-blind digital universe that impairs the very intelligence and capabilities—including empathy—that distinguish human beings from our machines.

To combat our fundamental loss of emotional intelligence online, she cofounded Affectiva, the pioneer in the new field of Emotion AI, allowing our technology to understand humans the way we understand one another. Girl Decoded chronicles el Kaliouby’s journey from being a “nice Egyptian girl” to becoming a woman, carving her own path as she revolutionizes technology. But decoding herself—learning to express and act on her own emotions—would prove to be the biggest challenge of all.

Whether you’re looking for diversity, romance, or the next big read, here you’ll find something for every kind of book club. For Book Clubs Looking for the Next Big Read: The Nickel Boys by Colson Whitehead In this bravura follow-up to the Pulitzer Prize, and National Book Award-winning #1 New York Times bestseller The Underground Railroad, Colson […]

Oh, the places you’ll go! With graduation around the corner, your patrons might need some inspiration for the perfect books to give their grads. Click for More Books for Grads.

Click to request eGalleys of our favorite May titles, and if you love the books, please consider nominating them for LibraryReads! Remember, voting for the May list ends on April 1st. Click to Request eGalleys of These May Titles (and More). Devolution by Max Brooks The #1 bestselling author of World War Z takes on the Bigfoot legend with a tale […]