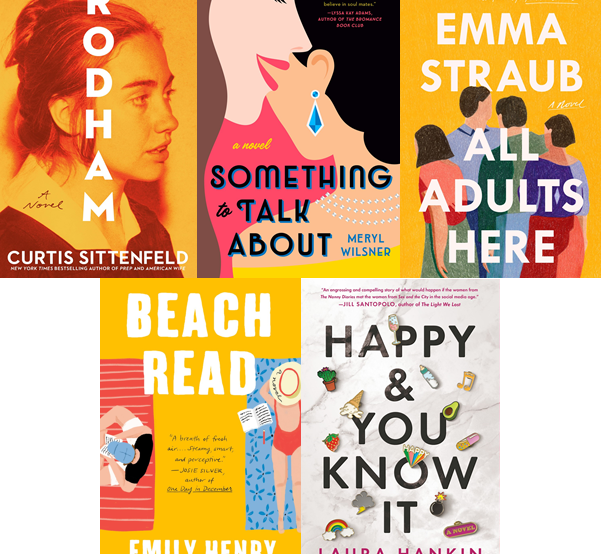 Public library staff across the nation have spoken! Congratulations to all the books selected for the May 2020 LibraryReads Top Ten List!

Rodham: A Novel by Curtis Sittenfeld (Hall of Fame)
“What if Hillary Rodham heeded the red ﬂags that came with dating Bill Clinton in the 1970s? Sittenfeld really captures the voice of a strong, brilliant, independent female narrator in this warm, whip-smart take on what could have been.”—Lindsay Jensen, Nashville Public Library, Nashville, TN

Something to Talk About by Meryl Wilsner (Top Pick)
“Jo, a successful producer and screenwriter, asks her assistant Emma to attend the SAG awards with her as a buffer to field questions. But after a red carpet photograph, rumors start spreading about their romantic involvement. A sweet, slow burn romance that gets steamy at the end between two people who obviously respect and value the other, despite various communication issues that arise. Give to readers who liked Girl Gone Viral (Rai), The Hating Game (Thorne), and Red, White & Royal Blue (McQuiston).” —Julie Graham, Yakima Valley Libraries, Yakima, WA

NoveList read-alike: When Katie Met Cassidy by Camille Perri
All Adults Here: A Novel by Emma Straub
“The ripple effects of choices linger for years and ultimately shape matriarch Astrid and her children. As several generations grapple with their own truths, an opportunity to begin again ultimately draws them all closer. This book asks the question, “Who is truth ultimately for, who benefits from it, and who does it hurt?” For fans of Clock Dance (Tyler) and The Most Fun We Ever Had (Lombardo).” —Jesica Sweedler DeHart, Neill Public Library, Pullman, WA

NoveList read-alike: The Precious One by Marisa de los Santos

Beach Read by Emily Henry
“Hooray for smart, emotional, well-written romance! Two old enemies meet by chance and decide to solve their writer’s block by swapping genres: Literary writer Augustus will trade his cynicism for a happily ever after, while January will try a “serious” novel where everyone ends up realistically miserable. What could go wrong? For readers who like Susan Mallery and Jennifer Crusie.” —Sharon Layburn, South Huntington Public Library, Huntington Station, NY

Happy and You Know It by Laura Hankin
“Claire is a musician whose former band became famous without her. She takes a gig singing nursery rhymes for a playgroup, and her life takes a couple of sharp lefts from there! For fans of Elin Hilderbrand and Elizabeth Berg.” —Danielle Hansard, Westland Public Library, Westland, MI

For more information about the program, or to learn how to vote for your favorite upcoming books, visit LibraryReads.org. And, don’t forget, voting for the June LibraryReads list ends 5/1!

Public library staff across the nation have spoken! Congratulations to all the books selected for the December 2019 LibraryReads Top Ten List! Click to Prepare for Your December Readers’ Advisory. Such a Fun Age (TOP PICK) by Kiley Reid ”Full of nuanced characters and a very current plot about race and privilege, Such a Fun Age will […]

The #1 bestselling author of World War Z takes on the Bigfoot legend with a tale that blurs the lines between human and beast—and asks what we are capable of in the face of the unimaginable. As the ash and chaos from Mount Rainier’s eruption swirled and finally settled, the story of the Greenloop massacre has passed […]