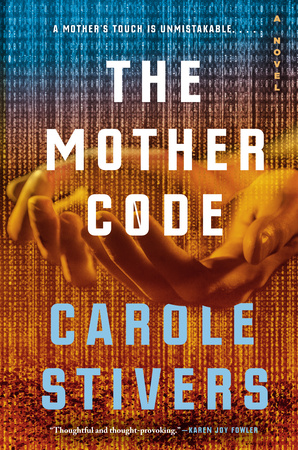 What it means to be human–and a mother–is put to the test in Carole Stivers’ debut novel set in a world that is more chilling and precarious than ever.

It’s 2049, and the survival of the human race is at risk. Earth’s inhabitants must turn to their last resort: a plan to place genetically engineered children inside the cocoons of large-scale robots—to be incubated, birthed, and raised by machines. But there is yet one hope of preserving the human order—an intelligence programmed into these machines that renders each unique in its own right—the Mother Code.

Kai is born in America’s desert southwest, his only companion his robot Mother, Rho-Z. Equipped with the knowledge and motivations of a human mother, Rho-Z raises Kai and teaches him how to survive. But as children like Kai come of age, their Mothers transform too—in ways that were never predicted. When government survivors decide that the Mothers must be destroyed, Kai must make a choice. Will he break the bond he shares with Rho-Z? Or will he fight to save the only parent he has ever known?

In a future that could be our own, The Mother Code explores what truly makes us human—and the tenuous nature of the boundaries between us and the machines we create.

If you liked the read, vote for The Mother Code for the May LibraryReads list by 4/1!

See the World Without Leaving Your Reading Chair

From California to Moscow, these novels will take your patrons to faraway places so they can see the world without leaving their reading chairs. Click for More Fiction that Takes You Away. The Madonna of the Mountains by Elise Valmorbida An epic, inspiring novel about one woman’s survival in the hardscrabble Italian countryside, and her determination […]