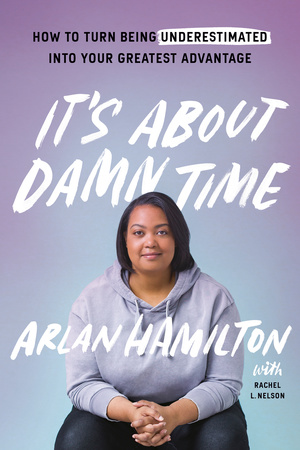 “A hero’s tale of what’s possible when we unlock our potential, continue the search for knowledge, and draw on our lived experiences to guide us through the darkest moments.”—Stacey Abrams

From a black, gay woman who broke into the boys’ club of Silicon Valley comes an empowering guide to finding your voice, working your way into any room you want to be in, and achieving your own dreams.

In 2015, Arlan Hamilton was on food stamps and sleeping on the floor of the San Francisco airport, with nothing but an old laptop and a dream of breaking into the venture capital business. She couldn’t understand why people starting companies all looked the same (white and male), and she wanted the chance to invest in the ideas and people who didn’t conform to this image of how a founder is supposed to look. Hamilton had no contacts or network in Silicon Valley, no background in finance—not even a college degree. What she did have was fierce determination and the will to succeed.

As much as we wish it weren’t so, we still live in a world where being underrepresented often means being underestimated. But as someone who makes her living investing in high-potential founders who also happen to be female, LGBTQ, or people of color, Hamilton understands that being undervalued simply means that a big upside exists. Because even if you have to work twice as hard to get to the starting line, she says, once you are on a level playing field, you will sprint ahead.

Perfect for fans of Where’d You Go, Bernadette and Small Admissions, a wry and cleverly observed debut novel about the privileged bubble that is Liston Heights High—the micro-managing parents, the overworked teachers, and the students caught in the middle—and the fallout for each of them when the bubble finally bursts. When a devoted teacher comes under pressure for […]

Join us, along with Booklist, Sterling, Workman Publishing, and Books on Tape, for a free, hour-long webinar on September 17th, as we present a delectable batch of cookbooks focusing on various cuisines, star chefs, and more to keep you up to date on the hottest cookbook trends. Click to Register for the Free Webinar.