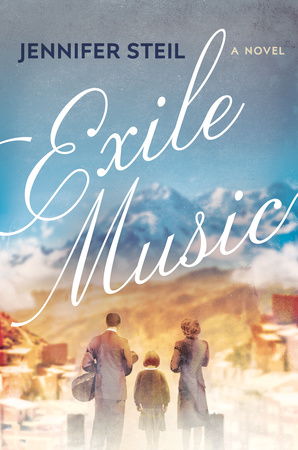 Based on an unexplored slice of World War II history, Exile Music is the captivating story of a young Jewish girl whose family flees refined and urbane Vienna for safe harbor in the mountains of Bolivia

As a young girl growing up in Vienna in the 1930s, Orly has an idyllic childhood filled with music. Her father plays the viola in the Philharmonic, her mother is a well-regarded opera singer, her beloved and charismatic older brother holds the neighborhood in his thrall, and most of her eccentric and wonderful extended family live nearby. Only vaguely aware of Hitler’s rise or how her Jewish heritage will define her family’s identity, Orly spends her days immersed in play with her best friend and upstairs neighbor, Anneliese. Together they dream up vivid and elaborate worlds, where they can escape the growing tensions around them.

But in 1938, Orly’s peaceful life is shattered when the Germans arrive. Her older brother flees Vienna first, and soon Orly, her father, and her mother procure refugee visas for La Paz, a city high up in the Bolivian Andes. Even as the number of Jewish refugees in the small community grows, her family is haunted by the music that can no longer be their livelihood, and by the family and friends they left behind. While Orly and her father find their footing in the mountains, Orly’s mother grows even more distant, harboring a secret that could put their family at risk again. Years pass, the war ends, and Orly must decide: Is the love and adventure she has found in La Paz what defines home, or is the pull of her past in Europe–and the piece of her heart she left with Anneliese–too strong to ignore?

If you liked the read, vote for Exile Music for the May LibraryReads list by 4/1!

Public library staff across the nation have spoken! Congratulations to all the books selected for the November 2016 LibraryReads Top Ten list! Click to Prepare for Your November Readers’ Advisory. Night School: A Jack Reacher Novel (#3) By Lee Child “Child goes back to the well and gives readers another glimpse into Jack Reacher’s past as a […]

Wonder Woman has inspired generations of girls and women for being a strong, powerful female superhero who proves women can do anything that men can. Over the years her power has not diminished one bit. Click for More Books About Wonder Woman. And don’t forget to celebrate Library Card Sign-up Month 2020 with Wonder Woman! This […]

Memory makes reality.  That’s what NYC cop Barry Sutton is learning, as he investigates the devastating phenomenon the media has dubbed False Memory Syndrome—a mysterious affliction that drives its victims mad with memories of a life they never lived. That’s what neuroscientist Helena Smith believes. It’s why she’s dedicated her life to creating a technology […]