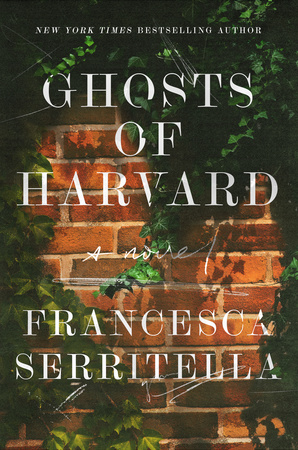 A Harvard freshman becomes obsessed with her schizophrenic brother’s suicide. Then she starts hearing voices.

Cadence Archer arrives on Harvard’s campus desperate to understand why her brother, Eric, a genius who developed paranoid schizophrenia took his own life there the year before. Losing Eric has left a black hole in Cady’s life, and while her decision to follow in her brother’s footsteps threatens to break her family apart, she is haunted by questions of what she might have missed. And there’s only one place to find answers.

As Cady struggles under the enormous pressure at Harvard, she investigates her brother’s final year, armed only with a blue notebook of Eric’s cryptic scribblings. She knew he had been struggling with paranoia, delusions, and illusory enemies—but what tipped him over the edge? With her suspicions mounting, Cady herself begins to hear voices, seemingly belonging to three ghosts who walked the university’s hallowed halls—or huddled in its slave quarters. Among them is a person whose name has been buried for centuries, and another whose name mankind will never forget.

Does she share Eric’s illness, or is she tapping into something else? Cady doesn’t know how or why these ghosts are contacting her, but as she is drawn deeper into their worlds, she believes they’re moving her closer to the truth about Eric, even as keeping them secret isolates her further. Will listening to these voices lead her to the one voice she craves—her brother’s—or will she follow them down a path to her own destruction?

If you liked the read, vote for Ghosts of Harvard for the May LibraryReads list by 4/1!

“Every time I thought I knew where Ghosts of Harvard was heading, I turned out to be wrong. Part mystery, part ghost story, part psychological thriller, this novel is all entertainment.”—#1 New York Times bestselling author Jodi Picoult

#FridayReads: In Case of Emergency by E. G. Scott

The new thriller from E. G. Scott follows a woman looking for answers after her boyfriend goes missing and a corpse appears that implicates her in the murder of a woman she never met. Charlotte, a midthirties Long Island woman, has felt so alone since her promising career in neuroscience imploded. But she has an […]

A three-step career system to help you tap into your own unique value to find a deeply meaningful and engaging job, whether you’re a college student, a recent graduate, or a new professional looking for a fresh start. In Finding Work You Love, award-winning University of Southern California business school professor Kirk Snyder helps you match the value you […]