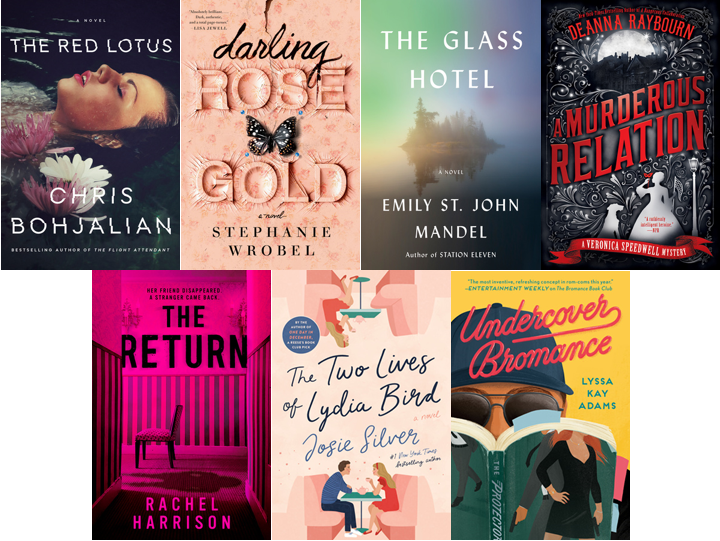 Public library staff across the nation have spoken! Congratulations to all the books selected for the March 2020 LibraryReads Top Ten List!

The Red Lotus by Chris Bohjalian (Hall of Fame)
“In the aftermath of her boyfriend’s disappearance in contemporary Vietnam, a New York ER doctor discovers the shocking truth about his secret life. This is an exciting edge-of-your-seat thriller that will keep you reading well into the night.”—Marion Sheehan, Canterbury Public Library, Canterbury, CT

Darling Rose Gold by Stephanie Wrobel
“Terrific psychological suspense based on an actual case where a mother deliberately made her daughter sick for years. The story is told in alternating perspectives from the points of view of Rose Gold and her mother, Patty, complex characters who are masterfully drawn, seeming sympathetic at some points and unsympathetic in others. For readers who liked The Silent Patient and The Execution of Noa P. Singleton.” —Alice Kober, Arapahoe Library District, Englewood, CO

The Glass Hotel: A Novel by Emily St. John Mandel
“A gorgeously written, immersive book about how easy it is to cross lines into questionable moral territory. At its center is Vincent, who loses her mother when she’s 13 and as an adult makes her way into the heart of the Country of Money in New York City. Narrated by a number of well-drawn characters in a shifting timeline. For fans of A Visit from the Goon Squad and The Goldfinch.” —Diana Armstrong, Multnomah County Library, Portland, OR

A Murderous Relation by Deanna Raybourn
“Veronica Speedwell and her partner, Stoker, find themselves involved in a mystery that coincides with the killing spree of Jack the Ripper. For fans of the Ladies Travelers Guide series and the Amelia Peabody mysteries. “—Stacy Tomaszewski, Alameda County Library, San Jose, CA

NoveList read-alike: The House at Baker Street by Michelle Birkby

The Return by Rachel Harrison
“The story of a creepy hotel, a mysterious disappearance and reappearance, and the complexities of friendships. For fans of Stephen King and Thomas Harris.” —Kate Currie, Hennepin County Library, Hennepin County, MN

The Two Lives of Lydia Bird: A Novel by Josie Silver
“A beautifully written exploration of heartbreak and grief, that takes place over the course of 18 months after Lydia loses her fiance Freddie in a tragic accident. For fans of Me Before You by Jojo Moyes and I Almost Forgot About You by Terry McMillan.”—Ashley Giangregorgio, Virginia Beach Public Library, Virginia Beach, VA

NoveList read-alike: Time of My Life by Allison Winn Scotch

For more information about the program, or to learn how to vote for your favorite upcoming books, visit LibraryReads.org. And, don’t forget, voting for the April LibraryReads list ends 3/1!

In this relentlessly paced novel of psychological suspense, New York Times bestselling author Michelle Richmond crafts an intense and shocking tale that asks: How far would you go to protect your marriage? Newlyweds Alice and Jake are a picture-perfect couple. Alice, once a singer in a well-known rock band, is now a successful lawyer. Jake […]

Touching on topics such as identity, mortality, and history, these titles are sure to foster great discussion at your book club. Click for More Graphic Novels for Your Book Clubs.

What are your thoughts about the Presidential nominees’ picks for Vice President? Do you understand the role of Vice President? Well, we’ve nominated the following titles to elucidate the position. These are standout books by and about former Vice Presidents – some of whom ascended to be Presidents and others who did not. Click for […]