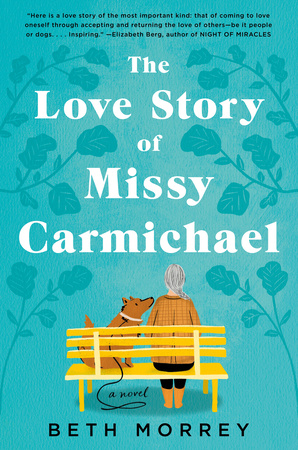 For readers of Eleanor Oliphant Is Completely Fine and A Man Called Ove, a life-affirming, deeply moving “coming-of-old” story, a celebration of how ordinary days are made extraordinary through friendship, family, and the power of forgiving yourself–at any age.

“Here is a love story of the most important kind: that of coming to love oneself through accepting and returning the love of others–be it people or dogs.” –Elizabeth Berg, author of Night of Miracles

The world has changed around seventy-nine-year-old librarian Millicent Carmichael, aka Missy. Though quick to admit that she often found her roles as a housewife and mother less than satisfying, Missy once led a bustling life driven by two children, an accomplished and celebrated husband, and a Classics degree from Cambridge. Now her husband is gone, her daughter is estranged after a shattering argument, and her son has moved to his wife’s native Australia, taking Missy’s beloved only grandchild half-a-world away. She spends her days sipping sherry, avoiding people, and rattling around in her oversized, under-decorated house waiting for…what exactly?

The last thing Missy expects is for two perfect strangers and one spirited dog named Bob to break through her prickly exterior and show Missy just how much love she still has to give. In short order, Missy finds herself in the jarring embrace of an eclectic community that simply won’t take no for an answer–including a rambunctious mutt-on-loan whose unconditional love gives Missy a reason to re-enter the world one muddy paw print at a time.

If you liked the read, vote for The Love Story of Missy Carmichael for the April LibraryReads list by 3/1!

#FridayReads: The Love Story of Missy Carmichael by Beth Morrey

Be One of the First to Read: THE GIRL BEFORE

First there was Gone Girl. Then there was The Girl on the Train. Now, there’s The Girl Before. Jane Cavendish is looking for a new beginning. One Folgate Street seems to be the answer to her prayers. The home is sleek and minimalist, and is wired to anticipate the occupant’s needs. And, she finds herself […]

Authors You Already Know and Love

From Bill Bryson to Rachel Maddow, Ken Follett to Elizabeth Strout, these big name authors have new books coming in the fall that your patrons are sure to go crazy for. Click for More Books by Authors You Know and Love. Click for Fall Spanish-translation Titles.

Learn more about the politics and fighting during the second world war with these books. Click for More World War II Nonfiction.   Want more content like this? Click below to subscribe to our weekly eNewsletter to discover the hottest upcoming books that will drive your holds lists and get access to exclusive giveaways, excerpt […]

From the National Book Award finalist, a breathtakingly spare and shattering new novel that traces the intersection of three star-crossed lives. Eden Malcom lies in a bed, unable to move or to speak, imprisoned in his own mind. His wife Mary spends every day on the sofa in his hospital room. He has never even […]