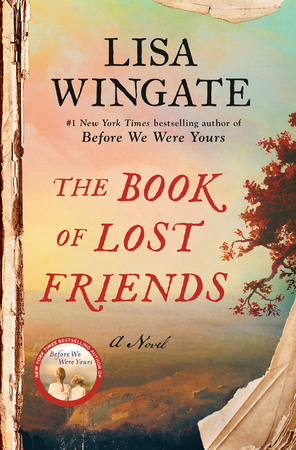 From the #1 New York Times bestselling author of Before We Were Yours comes a new novel inspired by historical events: a dramatic story of three young women on a journey in search of family amidst the destruction of the post-Civil War South, and of a modern-day teacher who rediscovers their story and its vital connection to her own students’ lives.

In her distinctive voice, Lisa Wingate brings to life startling stories from actual “Lost Friends” advertisements that appeared in Southern newspapers after the Civil War, as freed slaves desperately searched for loved ones who had been sold off.

Louisiana, 1875: In the tumultuous aftermath of Reconstruction, three young women set off as unwilling companions on a perilous quest: Lavinia, the pampered heir to a now-destitute plantation; Juneau Jane, her illegitimate free-born Creole half-sister; and Hannie, Lavinia’s former slave. Each carries private wounds and powerful secrets as they head for Texas, following dangerous roads rife with ruthless vigilantes and soldiers still fighting a war lost a decade before. For Lavinia and Juneau Jane, the journey is one of inheritance and financial desperation, but for Hannie, torn from her mother and eight siblings before slavery’s end, the pilgrimage westward reignites an agonizing question: Could her long-lost family still be out there? Beyond the swamps lie the seemingly limitless frontiers of Texas and, improbably, hope.

Louisiana, 1987: For first-year teacher Benedetta Silva, a subsidized job at a poor rural school seems like the ticket to canceling her hefty student debt–until she lands in a tiny, out-of-step Mississippi River town. Augustine, Louisiana, seems suspicious of new ideas and new people, and Benny can scarcely comprehend the lives of her poverty-stricken students. But amid the gnarled live oaks and run-down plantation homes lies the century-old history of three young women, a long-ago journey, and a hidden book that could change everything.

If you like the book, vote for The Book of Lost Friends for the April LibraryReads list by 3/1!

Books Set in Libraries and Bookstores

Transport you patrons to the places they’re missing dearly right now with these reads. Click for More Books Set in Libraries and Bookstores. Click for the Audiobooks of These Titles.

A warm, funny, and keenly perceptive novel about the life cycle of one family–as the kids become parents, grandchildren become teenagers, and a matriarch confronts the legacy of her mistakes. From the New York Times bestselling author of Modern Lovers and The Vacationers. When Astrid Strick witnesses a school bus accident in the center of town, it jostles loose a […]

“A beautifully written, extraordinary quest in which two ordinary, overlooked women embark on an unlikely scientific expedition to the South Seas.”—Helen Simonson, author of Major Pettigrew’s Last Stand A hilarious jaunt into the wilderness of women’s friendship and the triumph of outrageous dreams.”—Kirkus Reviews From the bestselling author of The Unlikely Pilgrimage of Harold Fry and The […]

Click to request eGalleys of some of our favorite April titles, and if you love the books, please consider nominating them for LibraryReads! Remember, voting for the April list ends on 3/1. Click to Request eGalleys of These April Titles and More. Click to Learn More About the Audio Editions. What Comes After by JoAnne Tompkins […]