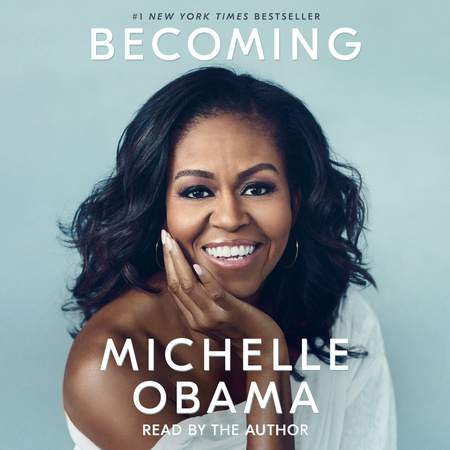 This GRAMMY®  is also a triumph for Penguin Random House Audio, whose imprints’ productions have been awarded the Best Spoken Word Album GRAMMY® three times in the last four years.

Mrs. Obama says of her GRAMMY® win, “Thank you to the Recording Academy for this honor! I had plenty of doubts about sharing so much of myself in Becoming, but this moment is another reminder that when we own the truth of who we are, we give ourselves the chance to connect with others in real, meaningful ways.”

Voted by the membership of The Recording Academy®, the GRAMMY® for BECOMING was announced yesterday (January 26) afternoon in Los Angeles during the GRAMMY Awards Premiere Ceremony®, before the nationally televised GRAMMY® broadcast.

Mrs. Obama’s previous Crown book, the #1 bestselling AMERICAN GROWN: The Story of the White House Kitchen Garden and Gardens Across America, was nominated in 2013 for Best Spoken Word album.

PRH Audio’s most recent Grammy Spoken Word Album winners:  Carrie Fisher’s THE PRINCESS DIARIST (2018)  and Carol Burnett’s IN SUCH GOOD COMPANY (2017). In all, Penguin Audios and Random House Audios have been nominated in this category 45 times, and have won the prize 16 of them.

Our Audio colleagues, several of whom attended the afternoon event, are deservedly thrilled about The Recording Academy® recognition for BECOMING.  Congratulations to Dan Zitt, Amanda D’Acierno, and the accomplished Group she leads.  And, of course, the biggest congratulations to our narrator and author, Michelle Obama.

We’re Bringing TLA to You

Texas, we miss you! We couldn’t gather together in person this year to celebrate the exciting new books being published, but we can still buzz about books together. Books connect us whether we’re meeting at the annual TLA Conference, or here in this digital space. Want to learn more about the hottest upcoming books that will […]

Authors In Their Own Words: Open Book Fall 2018

In December, we brought librarians and authors together at our biannual Open Book Event where librarians from the tristate area got to be the first to hear these authors discuss their upcoming books. For those who could not join us, we’re featuring the insightful speeches from these six incredible authors. Click to Watch Our Authors Speak to Librarians […]

Join us, along with Library Journal and School Library Journal, for our second annual LibraryCon Live, a day-long celebration of fandom-beloved stories and characters, from mind-bending speculative fiction to innovative comics and graphic novels. Hear from our featured authors and editors including Gwenda Bond, Mariko Tamaki, Sam Maggs, and Karen Berger, and learn how to plan a Comic Con-style event at […]