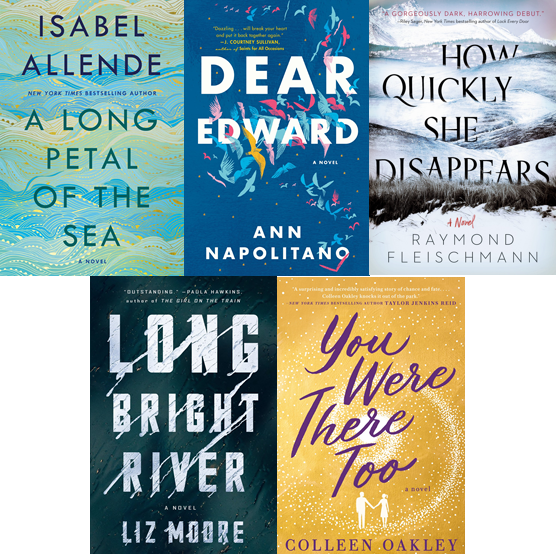 Public library staff across the nation have spoken! Congratulations to all the books selected for the January 2020 LibraryReads Top Ten List!

A Long Petal of the Sea: A Novel (HALL OF FAME)
by Isabel Allende
“A sweeping epic grounded in fact: In 1939, a Spanish family escapes the brutal rise of Franco and is brought by poet Pablo Neruda to Chile, only to see that country fall to its own dictatorial regime. Allende shows how, in an often cruel world, refugees can find homes in the hearts of one another. A profound and satisfying novel.” —Jill Minor, Washington County Public Library, Abingdon, VA

Dear Edward: A Novel (TOP PICK)
by Ann Napolitano
“A dear, dear wondrous novel. Edward is The Miracle Boy, the only survivor of a plane crash. As he struggles to navigate the landscape of his new life, we hear the voices of those who didn’t make it. Napolitano is an amazing writer who deserves a wider audience. For fans of Did You Ever Have a Family (Bill Clegg), The Grief of Others (Leah Hager Cohen), and The Friend (Sigrid Nunez).” —Jennifer Dayton, Fairfield Public Library, Fairfield, CT

How Quickly She Disappears
by Raymond Fleischman
“In 1941 Alaska, a woman whose twin disappeared 20 years earlier crosses paths with a sinister stranger threatening to reveal the truth of what happened. Does she dare risk what little she has left to save her sister? For readers of moody thrillers such as Watch Me Disappear by Janelle Brown and The Dry by Jane Harper.” —Jennifer Winberry, Hunterdon County Library, Flemington NJ

NoveList read-alike: Star of the North by David John

Long Bright River: A Novel
by Liz Moore
A compelling literary police procedural set in an opioidravaged Philadelphia neighborhood and centered on the relationship between two sisters whose lives have taken opposite paths. Your heart will ache as you grow to love the complex, strong, and incredibly vulnerable characters. For readers of Tana French and Dennis Lehane.” —Maggie Thomann, Northbrook Public Library, Northbrook, IL

NoveList read-alike: The Wolf Wants In by Laura McHugh

You Were There Too
by Colleen Oakley
“Mia is happily married to Harrison, but keeps dreaming about another man. One day her path crosses with this mystery man, and the results are devastating. This is a realistic, engrossing love story suited for fans of Liane Moriarty and Jodi Picoult.”—Danielle Hansard, Public Library of Westland, Westland, MI

For more information about the program, or to learn how to vote for your favorite upcoming books, visit LibraryReads.org. And, don’t forget, voting for the February LibraryReads list ends 1/1!

On 9/25, the Great American Read examined books on America’s list that feature heroic characters. Celebrities, literary experts, authors, and everyday book lovers discuss why our favorite heroes are complex and relatable, from the everyday hero to the tragic and unlikely or anti-hero. Check out the featured books below, as well as the full episode! Click to Vote for […]