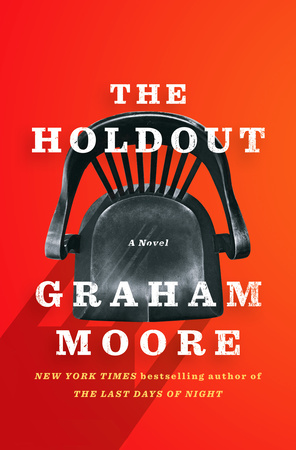 From the Academy Award–winning screenwriter of The Imitation Game and bestselling author of The Last Days of Night: a jury on a murder trial is deadlocked when a young woman manages to turn the tide to acquit; now, a decade later, she must face the consequences when a fellow juror is killed and she is the prime suspect.

It’s the most sensational case of the decade. Fifteen-year-old Jessica Silver, heiress to a billion-dollar real estate fortune, vanishes on her way home from school, and her teacher, Bobby Nock, a twenty-five-year-old African American man, is the prime suspect. The subsequent trial taps straight into America’s most pressing preoccupations: race, class, sex, law enforcement, and the lurid sins of the rich and famous. It’s an open-and-shut case for the prosecution, and a quick conviction seems all but guaranteed—until Maya Seale, a young woman on the jury, convinced of Nock’s innocence, persuades the rest of the jurors to return the verdict of not guilty, a controversial decision that will change all their lives forever.

Flash forward ten years. A true-crime docuseries reassembles the jury, with particular focus on Maya, now a defense attorney herself. When one of the jurors is found dead in Maya’s hotel room, all evidence points to her as the killer. Now, she must prove her own innocence—by getting to the bottom of a case that is far from closed.

As the present-day murder investigation weaves together with the story of what really happened during their deliberation, told by each of the jurors in turn, the secrets they have all been keeping threaten to come out—with drastic consequences for all involved.

If you liked the read, vote for The Holdout for the January LibraryReads list by 12/1!

#FridayReads: The Holdout by Graham Moore

#FridayReads: Save Me the Plums by Ruth Reichl

Trailblazing food writer and beloved restaurant critic Ruth Reichl took the job (and the risk) of a lifetime when she entered the glamorous, high-stakes world of magazine publishing. Now, for the first time, she chronicles her groundbreaking tenure as editor in chief of Gourmet, during which she spearheaded a revolution in the way we think about food. […]

Sometimes you may want something a little stronger than lemonade to go with refreshing reads. Maggie Hoffman’s The One-Bottle Cocktail is a collection of 80 wonderfully creative, fresh, and delicious cocktails that only require a bottle of your favorite spirit, plus fresh ingredients you can easily find at the market. Here are recipes for a Sassy Flower and […]