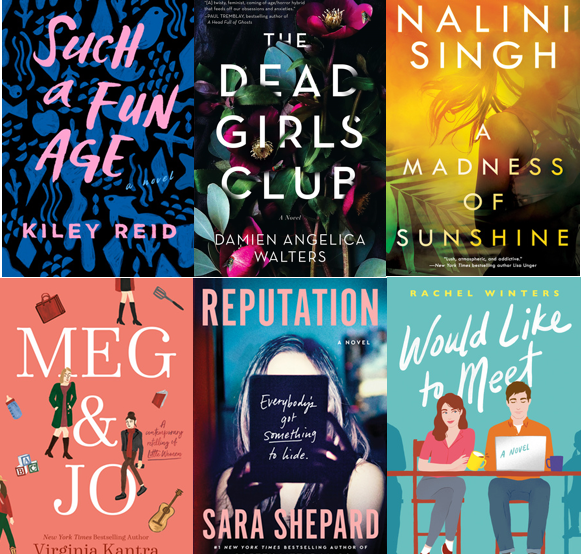 Public library staff across the nation have spoken! Congratulations to all the books selected for the December 2019 LibraryReads Top Ten List!

Such a Fun Age (TOP PICK)
by Kiley Reid
”Full of nuanced characters and a very current plot about race and privilege, Such a Fun Age will keep you slightly off-balance and questioning how you would react. Emira is a character that you’ll love for her feistiness and strength of character. Perfect for fans of Americanah, Red at the Bone, and An American Marriage.” —Linda Quinn, Fairfield Public Library, Fairfield, CT

NoveList read: That Kind of Mother by Rumaan Alam

The Dead Girls Club
by Damien Angelica Walters
“An engaging story, full of twists and turns. Chapters alternate from Heather’s childhood experiences to her present to form the whole story. More creepy than scary, pick this up if you want a story full of dread, suspense, childhood memories, death, and plenty of surprises. For fans of The Turn of the Key and The Silent Patient.”—Rebecca Kelley, Richland Library, Columbia, SC

NoveList read-alike: The Last Time I Lied by Riley Sager

A Madness of Sunshine
by Nalini Singh
“With a well-drawn cast of characters and a vivid New Zealand setting, this book slowly draws you in, picks up speed, and takes you on a dark, twisty ride. For fans of Then She Was Gone and All the Missing Girls.” —Sheryle Gouker, Redstone MWR Library, Huntsville, AL

Reputation: A Novel
by Sara Shepard
“Set in an elite private school, with a large cast of characters, this book has it all: scandals, affairs, and murder. I love the way the multiple perspectives intersect and intertwine. For fans of Gossip Girl and Big Little Lies.” —Aryssa Damron, DC Public Library, Washington, DC

NoveList read-alike: Just Between Us by Rebecca Drake

Would Like to Meet
by Rachel Winters
“Evie recreates famous movie meet-cutes as a way to inspire a jerk client to write a screenplay, and learns a lot about herself in the process. For fans of Meg Cabot and Jennifer Crusie. ” —Kassie Ettefagh, High Point Public Library, High Point, NC

For more information about the program, or to learn how to vote for your favorite upcoming books, visit LibraryReads.org. And, don’t forget, voting for the January LibraryReads list ends 12/1!

What it means to be human–and a mother–is put to the test in Carole Stivers’ debut novel set in a world that is more chilling and precarious than ever. It’s 2049, and the survival of the human race is at risk. Earth’s inhabitants must turn to their last resort: a plan to place genetically engineered […]

He Said, She Said by Gigi Gorgeous

Today, Gigi Gorgeous is beloved for her critically-acclaimed documentary, her outrageous sense of humor, her no-holds-barred honesty, and her glam Hollywood lifestyle. Ten years ago, she was a gawky Canadian teen named Gregory. In He Said, She Said, Gigi brings us on her personal journey from Gregory to Gigi, going deeper than ever before and […]