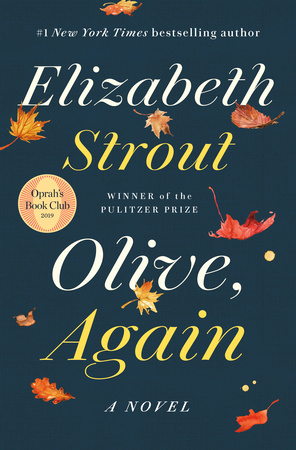 Oprah Winfrey has announced that her latest Oprah’s Book Club pick is Elizabeth Strout’s Olive, Again, a LibraryReads Hall of Fame pick for October! The selection was revealed on CBS This Morning, and you can watch the segment here.

The Pulitzer Prize-winning author’s latest New York Times bestseller continues the life of her beloved Olive Kitteridge, a character that has captured the imaginations of millions, including Oprah Winfrey, who said, “Ah, Olive. She teaches us so much about loneliness, judgment, aging, and loss. And empathy, too. I’m in awe of Strout’s ability to convey so much in so few words … I fell in love with Olive not despite her flaws, but because of them.”

Upon receiving the Oprah’s Book Club news, Strout commented, “Olive would say, ‘Godfrey Mighty!’ . . . But even Olive would be impressed with Oprah onboard with her story. Olive — who would not admit to it publicly—would be really pleased that Oprah finds her life so worthy of respect.”

Watch Elizabeth Strout Speak to Librarians About Olive, Again at ALA Annual 2019.

Listen to a Sample from the Audiobook.

Campus Reads: Class Is In Session

Head to the front of the class with these novels that take place on campuses across the country. Click for More Campus Reads. The Swallows by Lisa Lutz A new teacher at a New England prep school ignites a gender war—with deadly consequences—in a provocative novel from the bestselling author of The Passenger and the Spellman Files series. […]