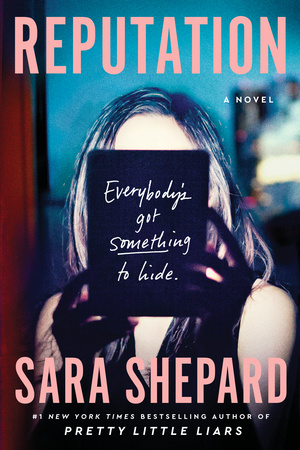 In this perfectly-paced new novel from Sara Shepard, the #1 New York Times bestselling author of Pretty Little Liars, the women of a tight-knit college town learn through gossip, scandal, betrayal, and even murder, who their neighbors and husbands really are.

Aldrich University is rocked to its core when a hacker dumps 40,000 people’s e-mails—the entire faculty, staff, students, alums—onto an easily searchable database. Rumors and affairs immediately leak, but things turn explosive when Kit Manning’s handsome husband, Dr. Greg Strasser, is found murdered. Kit’s sister, Willa, returns for the funeral, setting foot in a hometown she fled fifteen years ago, after a night she wishes she could forget. As an investigative reporter, Willa knows something isn’t right about the night Greg was killed, and she’s determined to find the truth. What she doesn’t expect is that everyone has something to hide. And with a killer on the loose, Willa and Kit must figure out who killed Greg before someone else is murdered.

Told from multiple points of view, Reputation is full of twists, turns, and shocking reveals. It’s a story of intrigue, sabotage, and the secrets we keep—and how far we go to keep them hidden. Number one bestseller Sara Shepard is at the top of her game in this brand-new adult novel.

If you liked the read, vote for Reputation for the December LibraryReads list by 11/1~

#FridayReads: Do Not Become Alarmed

From a beloved, award-winning writer, the much-anticipated novel about what happens when two families go on a tropical vacation—and the children go missing. When Liv and Nora decide to take their families on a holiday cruise, everyone is thrilled. The ship’s comforts and possibilities seem infinite. The children—two eleven-year-olds, an eight-year-old, and a six-year-old—love the […]

A twelve-year-old boy struggles with the worst kind of fame—as the sole survivor of a notorious plane crash—in a heart-wrenching and life-affirming novel for readers of Small Great Things, Little Fires Everywhere, and The Immortalists. What does it mean not just to survive, but to truly live?  One summer morning, twelve-year-old Edward Adler, his beloved older brother, his […]

Keep Your Readers’ Advisors in the Know with These Debuts

Your patrons are bound to fall for these novels from first time authors. Click for More Fall 2018 Debuts. And preview some of these debuts and more with our Fall 2018 Debut Fiction Excerpt Sampler, featuring the hottest debuts of the season!