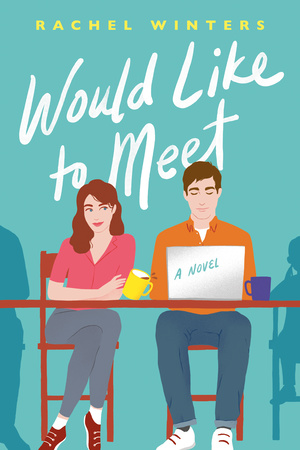 Can you fall in love like they do in the movies?

It’s Evie Summers’s job to find out. Because if she can’t convince her film agency’s biggest client, Ezra Chester, to write the romantic-comedy screenplay he owes producers, her career will be over. The catch? He thinks rom-coms are unrealistic–and he’ll only put pen to paper if Evie shows him that it’s possible to meet a man in real life the way it happens on the big screen.

Cynical Evie might not believe in happily ever after, but she’ll do what it takes to save the job that’s been her lifeline . . . even if it means reenacting iconic rom-com scenes in public. Spilling orange juice on a cute stranger? No problem. Leaving her number in books all over London to see who calls? Done. With a little help from her well-meaning friends–and Ben and Anette, the adorable father-daughter duo who keep witnessing her humiliations–Evie is determined to prove she can meet a man the way Sally met Harry. But can a workaholic who’s given up on love find a meet-cute of her very own?

Category: What We're Reading
Tagged with:libraryreads, would like to meet
0
420 views

Announcing the LibraryReads Favorite of Favorites 2018!

We’re so excited to announce the titles selected for the 2018 LibraryReads Favorite of Favorites List, including the #1 pick, Educated by Tara Westover! Click for the Full LibraryReads Favorite of Favorites 2018 List. Click to Listen to Clips from the Audiobooks. Educated: A Memoir by Tara Westover “In her memoir, Westover recounts her childhood growing […]

It’s officially the month of Halloween, so help your patrons celebrate the season with thrillers and mysteries that are filled with both tricks and treats. Click for More Thrillers and Mysteries.

Deacon King Kong by James McBride is the Next Oprah’s Book Club Pick!

Oprah Winfrey has chosen Deacon King Kong by James McBride as the latest Oprah’s Book Club pick. “In a moment when our country roils with anger and grief, this book reminds us that when we come together as a community in compassion and empathy, our love triumphs.”—Oprah Winfrey Click to Watch Oprah’s Announcement. Click to Read an Excerpt of Deacon King […]