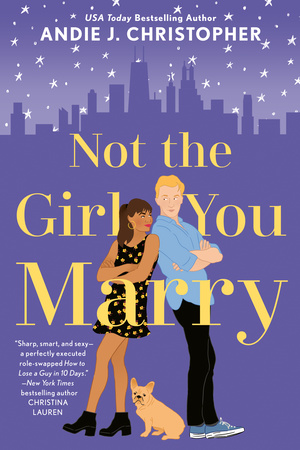 How To Lose a Guy in 10 Days gets a millennial makeover in this romantic comedy by USA Today bestselling author Andie J. Christopher.

Jack Nolan is a gentleman, a journalist, and unlucky in love. His viral success has pigeon-holed him as the how-to guy for a buzzy, internet media company instead of covering hard-hitting politics. Fed up with his fluffy articles and the app-based dating scene as well, he strikes a deal with his boss to write a final piece de resistance: How to Lose a Girl. Easier said than done when the girl he meets is Hannah Mayfield, and he’s not sure he wants her to dump him.

Hannah is an extremely successful event planner who’s focused on climbing the career ladder. Her firm is one of the most prestigious in the city, and she’s determined to secure her next promotion. But Hannah has a bit of an image problem. She needs to show her boss that she has range, including planning dreaded, romantic weddings. Enter Jack. He’s the perfect man to date for a couple weeks to prove to her boss that she’s not scared of feelings.

Before Jack and Hannah know it, their fake relationship starts to feel all too real—and neither of them can stand to lose each other.

If you liked the read, vote for Not the Girl You Marry for the November LibraryReads list by 10/1!

#FridayReads: Not the Girl You Marry by Andie J. Christopher

With topics ranging from atheism to Zen Buddhism, including canonical and contemporary spiritual texts, the 200s section of the library is frequented by readers of history, philosophy, faith, and religion. Among the nearly 100 books featured in this month’s list are distinguished literary translations, inspiring spiritual memoirs, engaging sermons of social consciousness, and thought-provoking reflections […]

A new novel from Sarah Jessica Parker’s imprint, SJP for Hogarth: a deeply affecting debut novel set in Trinidad, following the lives of a family as they navigate impossible choices about scarcity, loyalty, and love “Golden Child is a stunning novel written with force and beauty.  Though true to herself, Adam’s work stands tall beside icons of […]