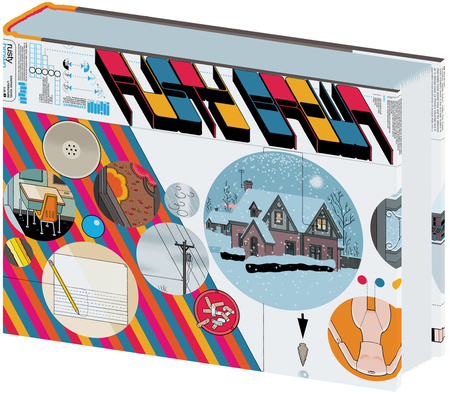 A major graphic novel event more than 16 years in progress: part one of the ongoing bifurcated masterwork from the brilliant and beloved author of Jimmy Corrigan: The Smartest Kid on Earth and Building Stories. Check out the rave reviews it’s received below!

“Ware is well known for his expansive, introspective, depth-plumbing works of graphic fiction, and his latest, featuring a series of interconnected, decade-spanning narratives spiraling outward from an Omaha school, is no different . . . There are only brief moments of warmth and affection, but the wider picture, depicting a complex matrix of aching loneliness; long-simmering, acidic resentment; and a desperation for human connection and fulfillment, is rich with pathos and powerfully stirring.”—Booklist [starred]

“Remarkable . . . Masterfully illustrated, brilliantly designed, and bursting with compassion . . .  This is without a doubt one of the most exciting releases of the year.”—Library Journal [starred Editor’s Pick]

“Ware delivers an astounding graphic novel about nothing less than the nature of life and time as it charts the intersecting lives of characters that revolve around an Omaha, Neb., parochial school in the 1970s . . . Ware again displays his virtuosic ability to locate the extraordinary within the ordinary, elevating seemingly normal lives into something profound, unforgettable, and true.”—Publishers Weekly [starred]

“Ware fans rejoice . . . Curious and compelling . . .  As with Ware’s other works of graphic art, the narrative arc wobbles into backstory and tangent: Each page is a bustle of small and large frames, sometimes telling several stories at once in the way that things buzz around us all the time, demanding notice . . . a beguiling masterwork of visual storytelling from the George Herriman of his time.”—Kirkus Reviews [starred]

Click to request eGalleys of our favorite March titles, and if you love the books, please consider nominating them for LibraryReads! Remember, voting for the March list ends on February 1st. Click to Request eGalleys of These March Titles. Daisy Jones & The Six by Taylor Jenkins Reid A gripping novel about the whirlwind rise of an iconic 1970s rock group […]

Are you a library book? Because we’re checking you out. Get swept away by grand gestures, romantic rendezvous, and more in these romances that will make your patrons swoon. Click for More Books that Will Pick You Up.   The Lost Love Song by Minnie Darke Behind every great love song is a great love story […]

National Poetry Month was established in 1996 by the Academy of American Poets. April was chosen by teachers, booksellers, librarians, and poets as a time to embrace and celebrate poetry—and to encourage the reading of poetry throughout the year. It has become one of the highest profile annual literary celebrations in the world! Dip into the pond […]