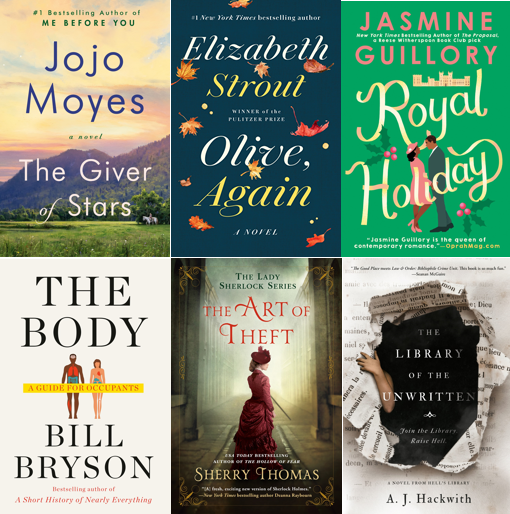 Public library staff across the nation have spoken! Congratulations to all the books selected for the October 2019 LibraryReads Top Ten List!

Read-alikes:
The Book Woman of Troublesome Creek by Kim Michele Richardson
The Yonahlossee Riding Camp for Girls by Anton DiSclafani
Over the Plain Houses by Julia Franks

Click to watch Jojo Moyes thanking librarians for all that they do!

Olive, Again: A Novel (HALL OF FAME)
by Elizabeth Strout
“Olive Kitteridge is back and still as crotchety, opinionated, and endearing as ever. Aging, death, racism, prejudices, infidelities–nothing gets past Olive as she sticks her nose into every corner of her small town.” —Sharon Hutchins, Keytesville Library, Keytesville, MO

Read-alikes:
Lila by Marilynne Robinson
Kitchens of the Great Midwest by J. Ryan Stradal
The Unlikely Pilgrimage of Harold Fry by Rachel Joyce

Royal Holiday (HALL OF FAME)
by Jasmine Guillory
“An irresistible Christmas fantasy about a woman of a certain age who falls for the queen of England’s private secretary on a visit to the U.K. Guillory describes Britain so well, and it was great to read a popular romance novel starring an older protagonist.” —Meghan Sanks, Glenview Public Library, Glenview, IL

Read-alikes:
A Princess in Theory by Alyssa Cole
Pride, Prejudice and Other Flavors by Sonali Dev
My Oxford Year by Julia Whelan

The Body: A Users Guide (TOP PICK)
by Bill Bryson
“A fascinating look at the human body and how it functions. Each historical tidbit is well-researched and thoroughly cited. Interesting stories, such as how diseases, cells, nerves, and organs were discovered, are woven throughout. For readers who like narrative nonfiction such as Gulp by Mary Roach, Being Mortal by Atul Gawande, and Guts by Giulia Enders.” —Carolynn Waites, Manvel Library, Manvel, TX

NoveList Read-alike: Gross Anatomy: Dispatches from the Front (and Back) by Mara Altman

The Art of Theft
by Sherry Thomas
“In this fun, playful series, Thomas has created a female version of Holmes who is vibrant, real, relatable, and intelligent. This fourth book has Holmes and Watson travel to France, with twists and turns the reader won’t see coming. Perfect for fans of Laurie R. King’s Mary Russell series and Tasha Alexander’s Lady Emily series.”–Carrie Pedigo, Tippecanoe County Public Library, Lafayette, IN

The Library of the Unwritten
by A.J. Hackwith
“The ideas of books never actually written possess dangerous potential and power. They are kept in the Library of the Unwritten in Hell. Determined librarians tend the library keeping watch for escaped characters, angels and demons. For fans of Genevieve Cogman or Neil Gaiman.” —Jessica Trotter, Capital Area District Library, Lansing, MI

NoveList Read-alike: A Darker Shade of Magic by V.E. Schwab

For more information about the program, or to learn how to vote for your favorite upcoming books, visit LibraryReads.org. And, don’t forget, voting for the November LibraryReads list ends 10/1!

Staff Picks Then and Now

In the past there have been some special titles that have captured the hearts of our entire team. We couldn’t get enough of Gail Honeyman’s Eleanor Oliphant Is Completely Fine and were thrilled by Blake Crouch’s Dark Matter. Now, we’re all dancing to the music of Daisy Jones & The Six by Taylor Jenkins Reid, a gripping novel about the whirlwind rise […]

Featuring books about Wham!, 80s nostalgia, The Golden Girls, and much more, these books are perfect for the Gen Xers (people born between 1961 and 1981) at your library. Click for More Books for Your Gen X Readers.