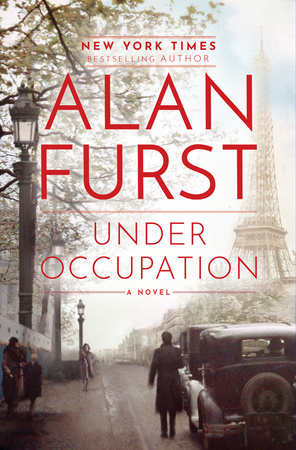 Occupied Paris, 1942. Just before he dies, a man being chased by the Gestapo hands off a strange-looking document to the unsuspecting novelist Paul Ricard. It looks like a blueprint of a part for a military weapon, one that might have important information for the Allied forces. Ricard realizes he must try to get it into the hands of members of the resistance network.

As Ricard finds himself drawn deeper and deeper into anti-Nazi efforts, and into increasingly dangerous espionage assignments, he travels to Germany and along the escape routes of underground resistance safe houses, to spy on Nazi maneuvers. When he meets the mysterious and beautiful Leila, a professional spy, they begin to work together to get crucial information out of France and into the hands of the Allied forces in London.

If you liked the read, vote for Under Occupation for the November LibraryReads list by 10/1!

#FridayReads: Under Occupation by Alan Furst

Celeste Ng, author of the hit debut novel, Everything I Never Told You joins Beaks & Geeks to talk about her new book and #1 LibraryReads pick, Little Fires Everywhere, a beautiful novel set in meticulously planned Shaker Heights, that traces the intertwined fates of the picture-perfect Richardson family and the enigmatic mother and daughter who upend […]

From practical guides to motivational reads, these books are great resources for your patrons who are entering the workforce for the first time or looking to change careers. Click for Books to Help Your Patrons with Their Job Search. Click for Audiobooks for Grads on the Job Hunt.