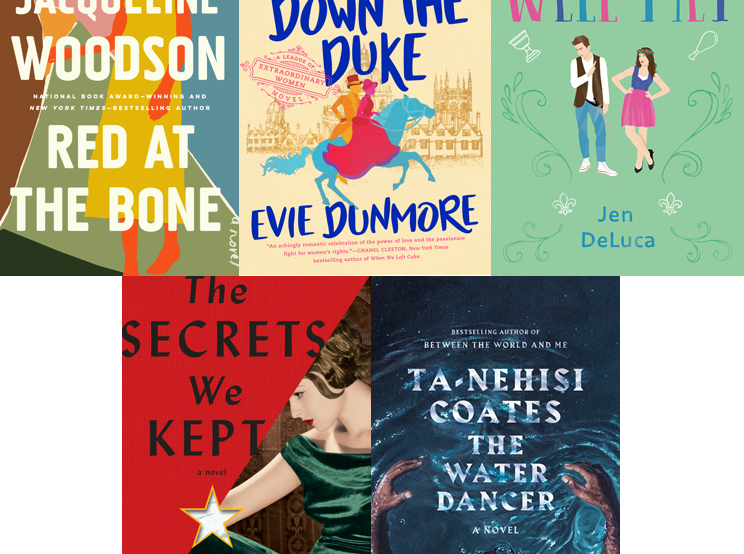 Public library staff across the nation have spoken! Congratulations to all the books selected for the September 2019 LibraryReads Top Ten List!

Red at the Bone: A Novel (TOP PICK)
by Jacqueline Woodson
“A rich, multigenerational weaving of two families, starting at Melody’s coming-of-age party. She wears the dress her mother didn’t get to wear because she was pregnant with Melody at the time. Alternating narration moves forward and backward in time, reflecting on family, desire, identity, and parenthood. For fans of Jesmyn Ward and Brit Bennett.” —Julie Graham, Yakima Valley Libraries, Yakima Valley, WA

NoveList Read-alike: Third Girl from the Left by Martha Southgate

Bringing Down the Duke
by Evie Dunmore
“Oxford student Annabelle is knee deep in the suffragette movement. The Duke is wary of supporting a cause not in the crown’s best interest, but can’t deny his attraction to Annabelle. A well-done version of the enemies-to-friends-to-lovers story. Perfect for fans of Juliana Gray and Amanda Quick.” —Amanda Brill, Rowan Public Library, Salisbury, NC

Well Met
by Jen DeLuca
“Emily has been through a rough patch and needs a new start. Where better to start than a small town that puts on a Ren Faire every year. At first she thinks it’s silly, but a handsome pirate soon changes her mind. For fans of Red, White, & Royal Blue by Casey McQuiston.” —Michelle Herring, Naperville Public Library, Naperville, IL

The Secrets We Kept: A Novel
by Lara Prescott
“Inspired by a true story of Dr. Zhivago. Pasternak had finished his controversial novel and needed to get it out of Russia to be published. A CIA agent posing as a typist is trained by another female operative and the two work to save the Cold War masterpiece. For readers who enjoyed The Red Sparrow by Jason Matthews and Sweet Tooth by Ian McEwan.” —Mamie Ney, Auburn Public Library, Auburn, MA

NoveList Read-alike: The Zhivago Affair: The Kremlin, the CIA, and the Battle Over a Forbidden Book by Peter Finn and Petra Couvee

The Water Dancer: A Novel
by Ta-Nehisi Coates
“A gorgeous novel blending historical fiction and magical realism to create a powerful portrait of the people who made up the Underground Railroad. For readers who enjoyed Beloved by Toni Morrison and She Would Be King by Wayetu Moore.” —Mara Bandy-Fass, Champaign Public Library, Champaign, IL

From the ingenious author of Jennifer Government and Lexicon: a brilliant work of science fiction that tells the intimate tale of four people facing their most desperate hour–alone, together, at the edge of the universe. The video changed everything. Before that, we could believe that we were safe. Special. Chosen. We thought the universe was a twinkling ocean […]

#FridayReads: The Bookish Life of Nina Hill by Abbi Waxman

“Abbi Waxman is both irreverent and thoughtful.”—#1 New York Times bestselling author Emily Giffin The author of Other People’s Houses and The Garden of Small Beginningsdelivers a quirky and charming novel chronicling the life of confirmed introvert Nina Hill as she does her best to fly under everyone’s radar.   Meet Nina Hill: A young woman supremely confident in her […]

Based on an unexplored slice of World War II history, Exile Music is the captivating story of a young Jewish girl whose family flees refined and urbane Vienna for safe harbor in the mountains of Bolivia As a young girl growing up in Vienna in the 1930s, Orly has an idyllic childhood filled with music. Her father […]