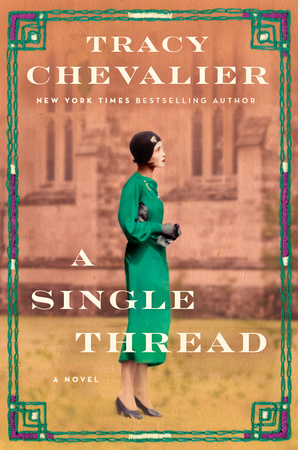 An immersive, moving story of a woman coming into her own at the dawn of the Second World War, from internationally bestselling author Tracy Chevalier

1932. After the Great War took both her beloved brother and her fiancé, Violet Speedwell has become a “surplus woman,” one of a generation doomed to a life of spinsterhood after the war killed so many young men. Yet Violet cannot reconcile herself to a life spent caring for her grieving, embittered mother. After countless meals of boiled eggs and dry toast, she saves enough to move out of her mother’s place and into the town of Winchester, home to one of England’s grandest cathedrals. There, Violet is drawn into a society of broderers–women who embroider kneelers for the Cathedral, carrying on a centuries-long tradition of bringing comfort to worshippers.

Violet finds support and community in the group, fulfillment in the work they create, and even a growing friendship with the vivacious Gilda. But when forces threaten her new independence and another war appears on the horizon, Violet must fight to put down roots in a place where women aren’t expected to grow. Told in Chevalier’s glorious prose, A Single Thread is a timeless story of friendship, love, and a woman crafting her own life.

If you liked the read, vote for A Single Thread for the September LibraryReads list by 8/1!

A fresh and imaginative retelling of the Rumpelstiltskin fairytale from the bestselling author of Uprooted, called “a very enjoyable fantasy with the air of a modern classic” by The New York Times Book Review. Miryem is the daughter and granddaughter of moneylenders, but her father is not a very good one. Free to lend and reluctant to […]

Convert your fiction readers with these true crime books that read like novels. Click to Discover Them All.

Books to Educate Your Patrons

From a memoir by a young teacher about her life-changing friendship with a student to an in-depth look at our public school system by a MacArthur award–winning educator, these books about education are essential, eye-opening reads for your community. Click for More Books About Education.