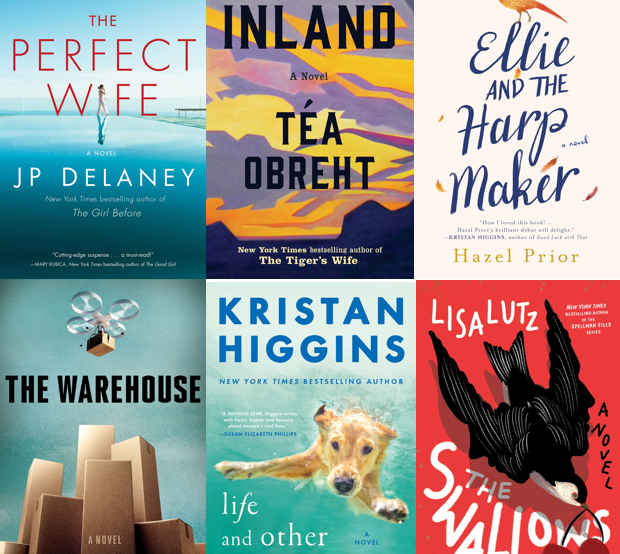 Public library staff across the nation have spoken! Congratulations to all the books selected for the August 2019 LibraryReads Top Ten List!

The Perfect Wife: A Novel by JP Delaney (HALL OF FAME)
“Abbie wakes up with no memory of how she ended up in the hospital. Her tech wizard husband tells her that after a horrific accident, he spent five years trying to bring her back. But is Abby’s return a miracle of science, or a nightmare? Delaney’s latest psychological thriller keeps you guessing.”– Joan Meis Wilson, Needles Public Library, Needles, CA

Read-alikes:
Before I Go To Sleep by S.J. Watson
How to Be A Good Wife by Emma Chapman
The Gone World by Tom Sweterlitsch

Ellie and the Harpmaker by Hazel Prior
“When Ellie walks into the Harp Barn, her life is bound to change. Dan the harpmaker is a sensitive soul who gives Ellie a harp. Ellie’s husband Clive thinks the gift is inappropriate and doesn’t support her desire to play, so she takes lessons behind his back. An engaging and tender book for fans of Fredrik Backman and Graeme Simsion.”–Kathleen Harriott, Punta Gorda Public Library, Punta Gorda, FL

Inland: A Novel by Téa Obreht
“Obreht lays a mythical voice over an already dreamlike landscape of drought in Arizona. A mother and half-grown sons generate a powerful dynamic not often explored, and the youngest, who knows about scary beasts, brings magic and intuition. A journey into a barren world, inside and out. For fans of Larry Watson and Alice Hoffman.”–Katherine Phenix, Rangeview Library District, Adams County, CO

Life and Other Inconveniences by Kristan Higgins
“Explores the complex relationships between caregivers and their children, as four generations of one family reflect on their past, and the failing health of the family matriarch looms large. For readers who like fully developed characters with real-world problems, and fans of Jennifer Weiner and Susan Elizabeth Phillips.”–Amanda Kowalcze, Green Hills Public Library District, Palos Hills, IL

NoveList Read-alike: The Precious One by Marisa de los Santos

The Swallows: A Novel by Lisa Lutz
“A dark, satirical book that centers around a school and the revenge that we seek in times of humiliation. It’s a twisty read that will have you following an investigation filled with secrets, lies, and threats. For readers who liked Prep by Curtis Sittenfeld and Small Admissions by Amy Poeppel.”–Kathryn Neal, Skiatook Library, Skiatook, OK

The Warehouse: A Novel by Rob Hart
“Paxton and Zinnia are new employees at Cloud where they work, live, and have their productivity and location tracked through their smartwatches. Gibson is the dying industrialist who created the Cloud company and is touring the country visiting his facilities. This near-future dystopian sci-fi thriller made me leery of ever shopping online again. For fans of The Circle by Dave Eggers and Notes from the Internet Apocalypse by Wayne Gladstone.”–Dan Brooks, Wake County Public Library, Raleigh, NC

For more information about the program, or to learn how to vote for your favorite upcoming books, visit LibraryReads.org. And, don’t forget, voting for the September LibraryReads list ends 8/1!

Click to request eGalleys of our favorite July titles, and if you love the books, please consider nominating them for LibraryReads! Remember, voting for the July list ends on June 1st. Click to Request eGalleys of These and More July Titles. The Nickel Boys by Colson Whitehead In this bravura follow-up to the Pulitzer Prize, and National Book Award-winning #1 New York […]

Sir Winston Leonard Spencer-Churchill, whose courage and conviction as Prime Minister led Britain to an allied victory in the Second World War, is once-again part of our cultural conversation due to the popular biopic, The Darkest Hour.  Gary Oldman took home the Oscar for Best Actor due to his exquisite embodiment of Churchill in the movie. To learn […]