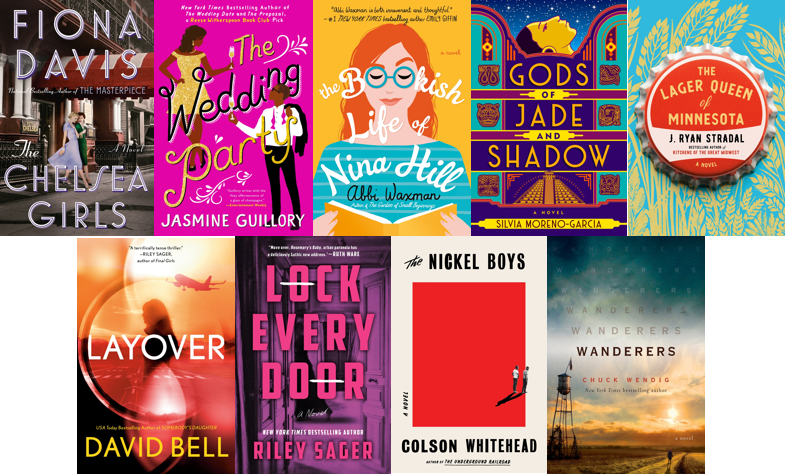 Public library staff across the nation have spoken! Congratulations to all the books selected for the July 2019 LibraryReads Top Ten List!

The Wedding Party (HALL OF FAME)
by Jasmine Guillory
“Maddie and Theo love to hate each other until they find themselves together at the one place they least expected–in bed. This laugh-out-loud story is the perfect companion to Guillory’s earlier romances.” —Afton Finley, Waseca Public Library, Waseca, MN

Read-alikes:
Sofia Khan Is Not Obliged by Ayisha Malik
The Hating Game by Sally Thorne
Intercepted by Alexa Martin

The Bookish Life of Nina Hill (Top Pick)
by Abbi Waxman
“Nina likes her bookish life just fine. She works in a bookstore and is on a highly competitive trivia team. She is funny and snarky and great company (says this reader). Suddenly, a father she never knew dies and leaves her with a pack of brothers and sisters and Nina may be forced out of her comfortable reading chair. For readers who enjoyed Waiting for Tom Hanks by Kerry Winfrey and The Bookshop by Penelope Fitzgerald.” —Eileen Curley, Hagaman Public Library, East Haven, CT

NoveList Read-alike: The Lost for Words Bookshop by Stephanie Butland

Gods of Jade and Shadow
by Silvia Moreno-Garcia
“In 1920s Mexico, a young woman unwittingly awakens a Mayan god and is pulled into his quest for vengeance. The odyssey that follows takes her through the jungles to Mexico City and the underworld as she realizes her inner strength and passion. For readers who enjoyed Uprooted and Circe.” —Emily Plagens, Allen Public Library, Allen, TX

The Lager Queen of Minnesota: A Novel
by J. Ryan Stradal
“A heartwarming and witty novel with a distinctly Minnesotan feel, the author follows two sisters and their grandmother who become involved in the brewing industry. For readers who loved Where’d You Go Bernadette.” —Katelyn Boyer, Fergus Falls Public Library, Fergus Falls, MN

Layover
by David Bell
“Joshua’s life has become a predictable pattern of departures and arrivals, a lot of his time spent in airports until he meets Morgan on a layover and there is an instant connection. during a layover, with whom he feels a deep connection. The next time he sees her is on the news as a missing person. For readers who liked Faithful Place by Tana French and Emma in the Night by Wendy Walker.”–Michelle Magnotta, Mamaroneck Public Library, Mamaroneck, NY

NoveList Read-alike: The Girl with a Clock for a Heart by Peter Swanson

Lock Every Door: A Novel
by Riley Sager
“A young woman gets a job house sitting in one of New York’s oldest and most glamorous apartments. A slow-burn full of twists and turns and a shocking conclusion. For readers who enjoyed The Wife Between Us and The Woman in the Window.” —Megan Alabaugh, Rocky River Public Library, Rocky River, OH

NoveList Read-alike: The Girl Before by J.P. Delaney

The Nickel Boys: A Novel
by Colson Whitehead
“An incredibly powerful story about an abusive boys’ reform school in the 1960s. Whitehead skillfully brings each character to life even as they suffer physical and emotional horrors. For fans of Panopticon by Jenni Fagan.” —Mara Bandy Fass, Champaign Public Library, Champaign, IL

NoveList Read-alike: The Boys of the Dark: A Story of Betrayal and Redemption in the Deep South by Robin Gaby Fisher

Wanderers: A Novel
by Chuck Wendig
“A pandemic is sweeping the nation that causes affected people to sleepwalk. They cannot be awoken and family and friends must accompany them on their journey while the CDC tries to find the cause and cure. For fans of Cryptonomicon and The Windup Girl.”–Kyle Sederstrom, Overbrook Public Library, Overbrook, KS

For more information about the program, or to learn how to vote for your favorite upcoming books, visit LibraryReads.org. And, don’t forget, voting for the August LibraryReads list ends 7/1!

Memory makes reality.  That’s what NYC cop Barry Sutton is learning, as he investigates the devastating phenomenon the media has dubbed False Memory Syndrome—a mysterious affliction that drives its victims mad with memories of a life they never lived. That’s what neuroscientist Helena Smith believes. It’s why she’s dedicated her life to creating a technology […]

Deacon King Kong by James McBride is the Next Oprah’s Book Club Pick!

Oprah Winfrey has chosen Deacon King Kong by James McBride as the latest Oprah’s Book Club pick. “In a moment when our country roils with anger and grief, this book reminds us that when we come together as a community in compassion and empathy, our love triumphs.”—Oprah Winfrey Click to Watch Oprah’s Announcement. Click to Read an Excerpt of Deacon King […]

What Will You Read for November 2020?