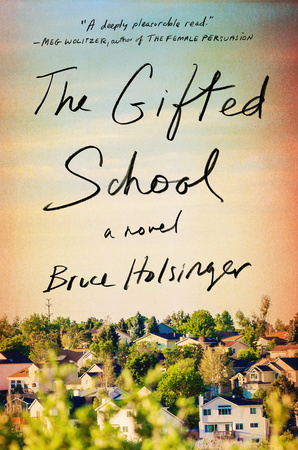 “Like Big Little Lies with standardized testing, this addictive novel digs hard into the culture of striving parents and anxious children, exploring privilege, competition and the elusiveness of happiness. A deeply pleasurable read.” – Meg Wolitzer

Smart and juicy, a compulsively readable novel about a previously happy group of friends and parents that is nearly destroyed by their own competitiveness when an exclusive school for gifted children opens in the community

This deliciously sharp novel captures the relentless ambitions and fears that animate parents and their children in modern America, exploring the conflicts between achievement and potential, talent and privilege.

Set in the fictional town of Crystal, Colorado, The Gifted School is a keenly entertaining novel that observes the drama within a community of friends and parents as good intentions and high ambitions collide in a pile-up with long-held secrets and lies. Seen through the lens of four families who’ve been a part of one another’s lives since their kids were born over a decade ago, the story reveals not only the lengths that some adults are willing to go to get ahead, but the effect on the group’s children, sibling relationships, marriages, and careers, as simmering resentments come to a boil and long-buried, explosive secrets surface and detonate. It’s a humorous, keenly observed, timely take on ambitious parents, willful kids, and the pursuit of prestige, no matter the cost.

In the lush and magical tradition of Naomi Novik’s award-winning Uprooted comes this riveting debut from brilliant young writer Callie Bates—whose boundless imagination places her among the finest authors of fantasy fiction, including Sarah J. Maas and Sabaa Tahir. Lady Elanna is fiercely devoted to the king who raised her like a daughter. But when […]

John Irving’s The World According to Garp 40th Anniversary Edition

The bestselling coming-of-age classic novel by John Irving–now in a limited 40th anniversary edition with a new introduction by the author. “He is more than popular. He is a Populist, determined to keep alive the Dickensian tradition that revels in colorful set pieces…and teaches moral lessons.”–The New York Times  The opening sentence of John Irving’s […]