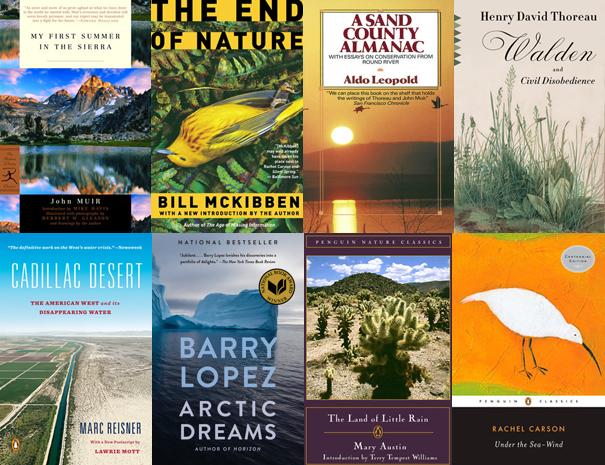 Protect our Planet! Earth Day, Monday, April 22, marks nearly 50 years since millions of people took to the streets to protest industrial pollution on April 22, 1970. In July of that year, the Environmental Protection Agency was created and now Earth Day is a global event with 192 countries participating. Coordinated by The Earth Day Network, it is the largest civic-focused day of action in the world. Check out the following classics that inspire a deeper appreciation of our beautiful, fragile planet.

In 1845, Thoreau began building a cabin at Walden Pond near Concord, Massachusetts. The inspiring and lyrical book that resulted is both a record of the two years Thoreau spent in withdrawal from society and a declaration of personal independence. By virtue of its casual, offhandedly brilliant wisdom and the easy splendor of its nature writing, Thoreau’s account of his immersion in solitude has become a signpost for the modern mind in an increasingly bewildering world.

UNDER THE SEA-WIND by Rachel L. Carson, Linda Lear

Celebrating the mystery and beauty of birds and sea creatures in their natural habitat, Under the Sea-Wind—Rachel Carson’s first book and her personal favorite—is the early masterwork of one of America’s greatest nature writers

THE END OF NATURE by Bill McKibben

This impassioned plea for radical and life-renewing change is today still considered a groundbreaking work in environmental studies. McKibben’s argument that the survival of the globe is dependent on a fundamental, philosophical shift in the way we relate to nature is more relevant than ever. McKibben writes of our earth’s environmental cataclysm, addressing such core issues as the greenhouse effect, acid rain, and the depletion of the ozone layer. More than simply a handbook for survival or a doomsday catalog of scientific prediction, this classic, soulful lament on Nature is required reading for nature enthusiasts, activists, and concerned citizens alike.

John Muir, a young Scottish immigrant, had not yet become a famed conservationist when he first trekked into the foothills of the Sierra Nevada, not long after the Civil War. He was so captivated by what he saw that he decided to devote his life to the glorification and preservation of this magnificent wilderness. My First Summer in the Sierra, whose heart is the diary Muir kept while tending sheep in Yosemite country, enticed thousands of Americans to visit this magical place, and resounds with Muir’s regard for the “divine, enduring, unwasteable wealth” of the natural world.

Winner of the National Book Award

The Arctic is a perilous place. Only a few species of wild animals can survive its harsh climate. In this modern classic, Barry Lopez explores the many-faceted wonders of the Far North: its strangely stunted forest, its mesmerizing aurora borealis, its frozen seas. And, as he examines the history and culture of the indigenous people, along with parallel narratives of intrepid, often underprepared and subsequently doomed polar explorers, Lopez drives to the heart of why the austere and formidable Arctic is also a constant source of breathtaking beauty, beguilement, and wonder.

THE LAND OF LITTLE RAIN by Mary Austin, Foreword by Terry Tempest Williams

“Between the high Sierras south from Yosemite—east and south over a very great assemblage of broken ranges beyond Death Valley, and on illimitably into the Mojave Desert” is the territory that Mary Austin calls the Land of Little Rain. Her vivid writings capture the landscape—from burnt hills to sun-baked mesas—as well as the rich variety of plant and animal life, and the few human beings who inhabit the land, including cattlemen, miners, and Paiute Indians.

The story of the American West is the story of a relentless quest for a precious resource: water. It is a tale of rivers diverted and dammed, of political corruption and intrigue, of billion-dollar battles over water rights, of ecological and economic disaster. In his landmark book, Cadillac Desert, Marc Reisner writes of the earliest settlers, lured by the promise of paradise, and of the ruthless tactics employed by Los Angeles politicians and business interests to ensure the city’s growth. He documents the bitter rivalry between two government giants, the Bureau of Reclamation and the U.S. Army Corps of Engineers, in the competition to transform the West. Based on more than a decade of research, Cadillac Desert is a stunning expose and a dramatic, intriguing history of the creation of an Eden–an Eden that may only be a mirage.

You are about to visit some of the most exciting places on earth. Not the sort of excitement that makes morning headlines or the nightly news. Instead it is the excitement that comes from experiencing the natural world as it always has been and should be, and seeing human beings living in tune with its subtlest rhythms. In Australian cattle country and in the primitive outback. On a desert island off Mexico and in the Sierra Madres. On the Rio Grande and in the great Southwest. On Lake Powell in Utah and in the living American desert. It is adventure. It is enlightenment. It is vintage Abbey.

A SAND COUNTY ALMANAC: WITH ESSAYS ON CONSERVATION FROM ROUND RIVER by Aldo Leopold

“We can place this book on the shelf that holds the writings of Thoreau and John Muir.”—San Francisco Chronicle

These astonishing portraits of the natural world explore the breathtaking diversity of the unspoiled American landscape—the mountains and the prairies, the deserts and the coastlines. Conjuring up one extraordinary vision after another, Aldo Leopold takes readers with him on the road and through the seasons on a fantastic tour of our priceless natural resources, explaining the destructive effects humankind has had on the land and issuing a bold challenge to protect the world we love.

THE SOLACE OF OPEN SPACES by Gretel Ehrlich

A stunning collection of personal observations that uses images of the American West to probe larger concerns in lyrical, evocative prose that is a true celebration of the region.

THE LORAX by Dr. Seuss

“I am the Lorax. I speak for the trees.”

Celebrate Earth Day with Dr. Seuss and the Lorax in this classic picture book about protecting the environment. Printed on recycled paper!

Dr. Seuss’s beloved story teaches kids to speak up and stand up for those who can’t. With a recycling-friendly “Go Green” message, The Lorax allows young readers to experience the beauty of the Truffula Trees and the danger of taking our earth for granted, all in a story that is timely, playful, and hopeful. The book’s final pages teach us that just one small seed, or one small child, can make a difference.

A mother and daughter with a shared talent for healing—and for the conjuring of curses—are at the heart of this dazzling first novel “Lush, irresistible . . . It took me into the hearts of women I could otherwise never know. I was transported.”—Amy Bloom, New York Times bestselling author of White Houses and Away Conjure Women is a sweeping story […]

Hostess with the Mostest

Now that your patrons know what to cook, here are some great books on how they can be the hostess with the mostest for their next dinner party. Click for More Books to Help Your Patrons Become the Perfect Hosts.

Drop-In Announcement: Prince Lestat and the Realms of Atlantis by Anne Rice

From Anne Rice, conjurer of the beloved bestsellers Interview with the Vampire and Prince Lestat, an ambitious and exhilarating new novel of utopian vision and power, uniting the ancient worlds and the legends of the Vampire Chronicles. At the novel’s center: the vampire Lestat de Lioncourt, hero, leader, inspirer, irresistible force, irrepressible spirit, battling (and […]

Drop In Alert: Assume the Worst by Carl Hiaasen, Illustrated by Roz Chast

This is Oh, the Places You’ll Never Go–the ultimate hilarious, cynical, but absolutely realistic view of a college graduate’s future. And what he or she can or can’t do about it. “This commencement address will never be given, because graduation speakers are supposed to offer encouragement and inspiration. That’s not what you need. You need a warning.” So […]