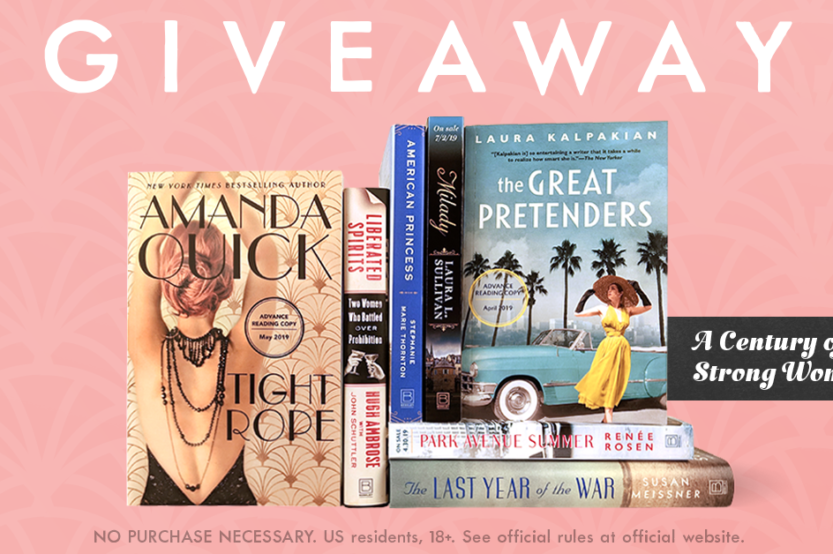 Enter for a chance to win a historical and women’s fiction bundle from Berkley!

LIBERATED SPIRITS by Hugh Ambrose with John Schuttler
A provocative new take on the women behind a perennially fascinating subject–Prohibition–by bestselling author and historian Hugh Ambrose.

THE LAST YEAR OF THE WAR by Susan Meissner
From the acclaimed author of Secrets of a Charmed Life and As Bright as Heaven comes a novel about a German American teenager whose life changes forever when her immigrant family is sent to an internment camp during World War II.

THE GREAT PRETENDERS by Laura Kalpakian
The daughter of Hollywood royalty, Roxanne Granville is used to getting what she wants—even if she has to break the rules. But after a falling-out with her grandfather, a powerful movie mogul, she has to face life on her own for the first time.…

PARK AVENUE SUMMER by Renée Rosen
Mad Men meets The Devil Wears Prada as Renée Rosen draws readers into the glamorous New York City of 1965 and Cosmopolitan magazine, where a brazen new editor-in-chief–Helen Gurley Brown–shocks America and saves a dying publication by daring to talk to women about all things off-limits.

TIGHTROPE by Amanda Quick
An unconventional woman and a man shrouded in mystery walk a tightrope of desire as they race against a killer to find a top secret invention before it’s too late.

MILADY by Laura L. Sullivan
From the glittering ballrooms of 17th Century England to the dangerous intrigues of the French court, Laura L. Sullivan brings an unlikely heroine to the page, turning on its head everything we’ve been told about The Three Musketeers and their ultimate rival.

A Century of Strong Women Giveaway

Celebrate our freedom to read these books that were once banned and challenged. One lucky winner will receive a Banned Books Canvas Print and copies of 5 iconic banned books: The Grapes of Wrath, Lord of the Flies, The Adventures of Huckleberry Finn, The Jungle, and Beloved. Enter to Win! NO PURCHASE NECESSARY. Enter between September 15th, 2019 and September 30th, 2019. Open to […]

Libraries are the epicenter of our communities. They provide vital access to information. They encourage new readers, support lifelong learners, and delight book lovers of all ages. Penguin Random House proudly recognizes the importance of libraries – not only for their work to build and grow a reading public, but for the ways libraries transform […]