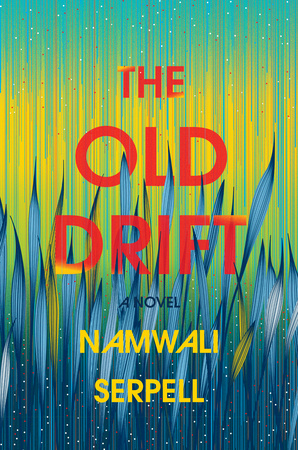 An electrifying debut from the winner of the 2015 Caine Prize for African writing, The Old Drift is the Great Zambian Novel you didn’t know you were waiting for.

On the banks of the Zambezi River, a few miles from the majestic Victoria Falls, there was once a colonial settlement called The Old Drift. Here begins the epic story of a small African nation, told by a mysterious swarm-like chorus that calls itself man’s greatest nemesis. The tale? A playful panorama of history, fairytale, romance and science fiction. The moral? To err is human.

In 1904, in a smoky room at the hotel across the river, an Old Drifter named Percy M. Clark, foggy with fever, makes a mistake that entangles the fates of an Italian hotelier and an African busboy. This sets off a cycle of unwitting retribution between three Zambian families (black, white, brown) as they collide and converge over the course of the century, into the present and beyond. As the generations pass, their lives – their triumphs, errors, losses and hopes—form a symphony about what it means to be human.

From a woman covered with hair and another plagued with endless tears, to forbidden love affairs and fiery political ones, to homegrown technological marvels like Afronauts, microdrones and viral vaccines—this gripping, unforgettable novel sweeps over the years and the globe, subverting expectations along the way. Exploding with color and energy, The Old Drift is a testament to our yearning to create and cross borders, and a meditation on the slow, grand passage of time.

If you liked the read, vote for The Old Drift for the March LibraryReads list by 2/1!

Click to request eGalleys of our favorite August titles, and if you love the reads, please consider nominating one (or more) for LibraryReads! Remember, voting for the August 2016 List ends on June 20th! The City Baker’s Guide to Country Living by Louise Miller A warm, full-hearted novel about a big-city baker who discovers the true meaning of […]

Click to request eGalleys of our favorite May titles, and if you love the books, please consider nominating them for LibraryReads! Remember, voting for the May list ends on April 1st. Click to Request eGalleys of These and More May Titles. The Farm by Joanne Ramos Nestled in New York’s Hudson Valley is a luxury retreat boasting every amenity—and all […]

At ALA Midwinter in Denver last week, the 2018 Notable Books and Reading List were announced. The Notable Books List is an annual best-of list comprised of twenty six titles written for adult readers and published in the US including fiction, nonfiction, and poetry. Below, you’ll find our titles that were selected this year! Fiction […]

“Bullets, blood, bodies, and belly-laughs: all the ingredients of a classic mystery novel. Stephen Spotswood hard-boils with the best of ’em!”–Alan Bradley, bestselling author of the Flavia de Luce Mystery Series Introducing Pentecost and Parker, two unconventional female detectives who couldn’t care less about playing by the rules, in their cases and in their lives. […]