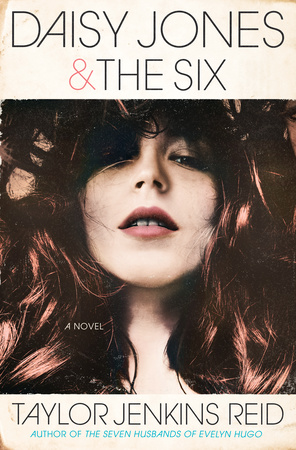 A favorite of the Penguin Random House Library Marketing department, Daisy Jones & The Six is a gripping novel about the whirlwind rise of an iconic 1970s rock group and their beautiful lead singer, revealing the mystery behind their infamous breakup.

“I devoured Daisy Jones & The Six in a day, falling head over heels for it. Daisy and the band captured my heart.”—Reese Witherspoon

Everyone knows Daisy Jones & The Six, but nobody knows the reason behind their split at the absolute height of their popularity . . . until now.

Daisy is a girl coming of age in L.A. in the late sixties, sneaking into clubs on the Sunset Strip, sleeping with rock stars, and dreaming of singing at the Whisky a Go Go. The sex and drugs are thrilling, but it’s the rock ’n’ roll she loves most. By the time she’s twenty, her voice is getting noticed, and she has the kind of heedless beauty that makes people do crazy things.

Also getting noticed is The Six, a band led by the brooding Billy Dunne. On the eve of their first tour, his girlfriend Camila finds out she’s pregnant, and with the pressure of impending fatherhood and fame, Billy goes a little wild on the road.

Daisy and Billy cross paths when a producer realizes that the key to supercharged success is to put the two together. What happens next will become the stuff of legend.

The making of that legend is chronicled in this riveting and unforgettable novel, written as an oral history of one of the biggest bands of the seventies. Taylor Jenkins Reid is a talented writer who takes her work to a new level with Daisy Jones & The Six, brilliantly capturing a place and time in an utterly distinctive voice.

Listen to the Music that Inspired the Novel.

If you liked the read, vote for Daisy Jones & The Six for the March LibraryReads list by 2/1!

“Reid is a stunning writer whose characters are unforgettable and whose stories are deeply emotional. . . . Her most gripping novel yet.”—Emily Giffin, author of All We Ever Wanted

“Reid’s writing is addictive and all-consuming. Filled with passion, complexity, and fascinating detail, Daisy Jones & The Six felt so real, I had to remind myself that it was fiction.”—Jill Santopolo, author of The Light We Lost

“From the very first page you know this book is something special. Taylor Jenkins Reid brings insight and poetry to a story that’s utterly unique and deeply authentic, one that transports you to world of seventies rock—with all its genius and temptation and creativity—so completely it feels like you’re there.”—Katherine Center, author of How to Walk Away

“Raw, emotive, and addictively voyeuristic, Daisy Jones & The Six is imbued with the same anguished heart that fuels the very best rock ‘n’ roll. Like my favorite albums, this book will live with me for a very long time.”—Steven Rowley, author of Lily and the Octopus

“An explosive, dynamite, down-and-dirty look at a fictional rock band told in an interview style that gives it irresistible surface energy . . . although the real power of this delicious novel is at its tender beating heart. It’s an anthem and a ballad and a marvel.”—Elin Hilderbrand, author of The Perfect Couple

It’s officially the month of Halloween, so help your patrons celebrate the season with thrillers and mysteries that are filled with both tricks and treats. Click for More Thrillers and Mysteries.

Whether they’re hosting BBQs or dedicated to eating healthy meals, we’ve got the perfect summertime cookbooks for patrons. Click for Sweet & Savory Summer Cookbooks.  Click for Cookbooks to Help You Stay Healthy This Summer.

“Bullets, blood, bodies, and belly-laughs: all the ingredients of a classic mystery novel. Stephen Spotswood hard-boils with the best of ’em!”–Alan Bradley, bestselling author of the Flavia de Luce Mystery Series Introducing Pentecost and Parker, two unconventional female detectives who couldn’t care less about playing by the rules, in their cases and in their lives. […]

With starred reviews from publications including Booklist, Kirkus Reviews, Publishers Weekly, Library Journal, and AudioFile—your patrons will want to read these much-anticipated books that reviewers are raving about. FICTION: The Queen’s Weapons by Anne Bishop Enter the dark and sensual realms of the Black Jewels, a world where power always has a price, in this sweeping story in […]