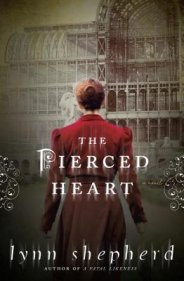 The shadow of Bram Stoker’s Dracula looms large over the darkest mystery yet faced by Victorian detective Charles Maddox—as the acclaimed author of The Solitary House and A Fatal Likeness once again pays homage to a literary classic, in a chilling tale of superstition, dangerous science, and shocking secrets.

When an Austrian nobleman offers a substantial donation to the University of Oxford, Charles Maddox is called on to investigate the generous benefactor, the mysterious Baron Von Reisenberg. A man of impeccable breeding, the Baron is nonetheless the subject of frightened whispers and macabre legends. Though Maddox isn’t one to entertain supernatural beliefs, the dank halls and foreboding shadows of the Baron’s castle begin to haunt his sleep with nightmares.

Meanwhile, London is on the verge of widespread panic because of a string of gruesome murders committed by an elusive predator branded the Vampire. But there’s little doubt in Maddox’s mind who is responsible. And whether his enemy proves merely mortal—or something more—Maddox must finally end the monstrous affair . . . before more innocent blood is spilled.

“Captures some of the best elements of Dracula, while at the same time creating a thrilling and absorbing crime novel.” —The Dracula Society

Vote For Your LibraryReads Favorite of Favorites!

This month, Brightly—a new resource to help moms and dads grow lifelong readers—is teaming up with The New York Public Library to support their efforts to bring books, information, and education to readers of all ages. For every new person who signs up for the Brightly newsletter from now through March 9th, 2015, Brightly will […]