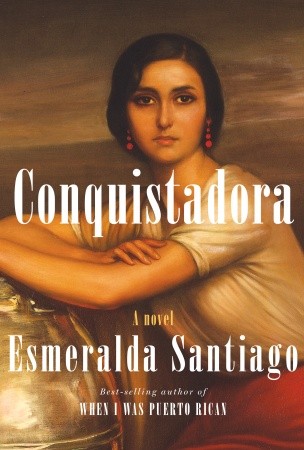 We just got in some more amazing praise for Esmeralda Santiago’s new novel, CONQUISTADORA. I have bolded my favorite parts. Don’t leave your multicultural and historical fiction collections bereft of this one. Have you read it? Let us know what you thought.

“Extraordinary . . . a historical novel set in 19th Puerto Rico, featuring a high-handed, strong-willed woman determined to escape her boring upper-class future in Spain. When twin brothers inherit a sugar plantation in Puerto Rico, Ana marries them (who can tell them apart?), and they embark on what for the brothers is a lark, but for Ana is serious business. From the start, she takes to the land and the work of processing cane in the Caribbean, keeping the slaves inherited with the property and adding to their number over the years. She becomes the very image of a conquering hero: implacable, outspoken, demanding. Her husbands languish and fade while Ana runs Hacienda los Gemelos without their help. The issues of social caste, slavery, and sex roles make this a fascinating read. It’s an outstanding story, full of pathos, tropical sensuality, and violence—but it also poses uncomfortable moral questions readers are forced to consider . . . Storytelling genius . . . Conquistadora is a book-group must.”

“Santiago brings passion, color, and historical detail to this Puerto Rican Gone with the Wind, featuring a hard-as-nails heroine more devoted to her plantation than to any of the men in her life . . . Ana grows up the willful daughter of aristocratic parents during the waning years of Spain’s colonial era. [She is] a not-so-innocent convent girl who marries her best friend’s fiancé’s twin brother, then heads to Puerto Rico without her friend, but with both twins in tow. The young men intend to make their fortunes, but it is Ana who has the savvy and determination to persevere through hurricanes, slave revolts, cholera and any other challenge the island has to offer. . . Santiago makes Caribbean history come alive through characters as human as they are iconic. The richness of her imagination and the lushness of her language will serve saga enthusiasts well, and she provides readers a massive panorama of plantation life—plus all you could ever want to know and more about growing sugar cane.”

“Having launched her writing career with the well-regarded memoir When I Was Puerto Rican, Santiago goes for broke with this grand, sprawling novel, which starts out in 19th-century Spain. Ana Cubillas, enraptured by the diaries of an ancestor who explored Puerto Rico with Ponce de León, is now in love with the island and finds a way to get there. . . . She just wasn’t prepared for the heat, the wildlife—and the slave labor. Engrossing and polished, without the let’s-just-get-through-it writing than can mar sagas . . . Perfect for those who want fun but literate reading.”

“Gloriosa Ana María de los Ángeles Larragoity Cubillas Nieves de Donostia—Ana for short—is slight for a Spanish aristocrat, and unfashionably dark-skinned. In convent school in the 1830s, having eccentrically buried her not-so-pretty nose in the journal of a conquistador, she decides to become one, after a fashion, herself. . . . A decades-long story about marriage, slavery, and calculated choices—Ana makes an unspoken, unnatural pact with her young husband and his twin brother—Conquistadora is a splendid expedition into colonial history complete with enrapturing suspense to the very end.”

“The multitalented author of When I Was Puerto Rican offers a big, bold novel about life on a Caribbean sugar plantation in the mid-19th century. Ana Cubillas, the descendant of Latin American conquistadors, is unhappy with the confined life of a young woman in Spain. She marries Ramon Argoso and encourages him and his twin, Inocente, to take over their family’s plantation in Puerto Rico. So begins the saga of Ana’s determination to revive the plantation in the face of all obstacles, from hurricanes to cholera epidemics to slave revolts. Is Ana an admirable example of female endurance, or does her relentless ambition only bring tragedy to her family? Can we have any sympathy for someone whose success comes from the backbreaking slavery of others? These are the questions Santiago poses in this lively, well-researched historical novel. With drama, adventure, and even a bit of magical realism, Conquistadora may remind readers of Isabel Allende’s novels of Latin America. Highly recommended.”

“If, as the proverb goes, history is written by the hunters, then Esmeralda Santiago has imagined history as written from the point of view of the lions. A remarkable story for its detail, imagination, meticulous research, and wisdom, this is history written by a lion at the height of her powers.”

—Sandra Cisneros, author of The House on Mango Street

“A powerful new novel that is colorful, sexy, and shimmering with magical writing as lush as the tropical island on which it takes place. Alive with all their passions and flaws, here are characters so boldly imagined they feel real, and in a story so transporting you can almost smell the sugar cane . . . I fell in love with the grand adventure that is Conquistadora—so will you!”
?
—Terry McMillan, author of Getting to Happy and Waiting to Exhale

Celebrate Teen Read Week with books perfect for all of your teen readers – from aspiring graphic novelists to budding fashionistas to literary enthusiasts and more. Inspire your teen readers to follow their dreams with a collection of great books and resources. Seconds by Bryan Lee O’Malley The highly anticipated new standalone full-color graphic novel […]