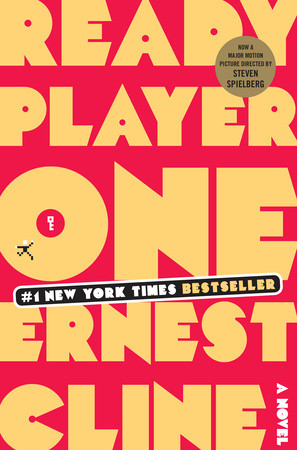 This Friday, it’s going to be READY PLAYER ONE, the much-anticipated debut from screenwriter and “unrepentant geek” Ernest Cline. This one’s been an in-house favorite for some time now, complete with some unexpected fans (people I suspected wouldn’t be into it at all, like Marcia, our Library Marketing VP, who loved it).

The plot is complicated. But know that it’s 2044,  almost everyone lives in a virtual world, there is a massive fortune to be had from that world’s founder, puzzles to be solved to get it, and one unsuspecting guy who gets caught at the center of history’s most massive and desperate game of…well…80s and 90s trivia?

Everyone is a geek about something. What kind of knowledge would you love to be tested on if the prize were the biggest fortune the world has ever seen (like, your dream Jeopardy category)? Leave your answer in the comments to be eligible to win an ARC! You’ll have until Monday.

Some additonal praise for Cline’s debut:

“This adrenaline shot of uncut geekdom, a quest through a virtual world, is loaded with enough 1980s nostalgia to please even the most devoted John Hughes fans… sweet, self-deprecating Wade, whose universe is an odd mix of the real past and the virtual present, is the perfect lovable/unlikely hero.”–Publishers Weekly

It's Friday. Let's give something away.

Today marks 50 years since the assassination of our 35th president, John F. Kennedy. From the beginning of his political career JFK quickly brought a generation renewed hope for the future of their country and the world. Decades later we remain fascinated with this American icon, his family, and his vision. We wanted to give […]

Here in the Library Marketing Department, we find ourselves frequently discussing which book we’ve each recently begun or what we’re most looking forward to reading the moment the manuscript becomes available.  It’s as if we’re working in a book club!  We know each other’s reading tastes and often make recommendations accordingly.  Peer pressure to bring a […]

Voices Inside My Head When people talk about my first novel, FINN (and please allow me, right here and right now, to offer up another “thank you” for that Notable Book designation), they wonder about my decision to avoid dialect in the characters’ speech. My answer is that if I had tried that kind […]