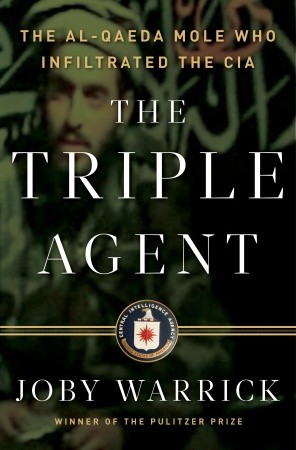 THE TRIPLE AGENT (coming this July) has been getting some great advance quotes recently, the most recent from bestselling author Robert Baer. See below for a round-up! It’s shaping up to be a must-have for your current-events section.

“I’ve never read a book like this, a detailed and compelling postmortem of an intelligence failure. In a driving narrative Warrick tells the story of how the CIA came to suffer its worst loss ever. The Triple Agent is not only the best book out there on the CIA’s hunt for al-Qaeda, it’s the best book on post-9/11 CIA, bar none. Read it.”

—Robert Baer, bestselling author of See No Evil. From his Amazon Guest Review

“The Triple Agent is a spy thriller like no other. Never has such a giant intelligence debacle been chronicled this vividly, this intimately. Riveting and harrowing, laden with deception and duplicity, it is a remarkable, behind-the-curtain account of the CIA’s darkest day in Afghanistan.”

—Rajiv Chandrasekaran, author of Imperial Life in the Emerald City

“The Triple Agent is by turns harrowing and heartbreaking, fascinating and frightening. Joby Warrick takes the reader deep inside the CIA’s biggest disaster since 9/11, a monumental blunder that allowed an al-Qaeda mole, carrying a 30-pound bomb, into the agency’s highly secret, frontline outpost along the Afghan border with Pakistan. The blast left seven agency employees dead and many questions unanswered, questions that Warrick skillfully answers in a tale that reads like a thriller and stretches from the dusty back alleys of Waziristan to the plush executive floor at Langley.”

—James Bamford, author of the bestselling The Puzzle Palace, Body of Secrets, and The Shadow Factory

“The Triple Agent is a superlative piece of reporting and writing. Joby Warrick manages to take the reader inside the CIA, Jordanian intelligence, and al-Qaeda. His intimate portraits of intelligence officers and the terrorists they stalk are unforgettable. The Triple Agent is one of the best true-life spy stories I have ever read.”

—David Ignatius, columnist for The Washington Post and author of Bloodmoney

“A startling and memorable account of daring, treachery, and catastrophe in the CIA’s war against al-Qaeda. The deadly buzz of unmanned drones, the fanatical drive of a suicide bomber, and the desperate hopes of the intelligence agents at outpost Khost are drawn together in a powerful and fast-paced story of our time.”

#FridayReads: BOOK OF AGES: The Life and Opinions of Jane Franklin By Jill Lepore

It’s agreed, BOOK OF AGES is a revelatory portrait of Benjamin Franklin’s youngest sister Jane and a history of history itself. Book of Ages will not disappoint any Franklin-o-phile or Founding Era enthusiast. (See press praise below) It was written by one of our most accomplished and widely admired historians, Jill Lepore who is the […]

Enter the World of … Winter Palace by Eva Stachniak!

Catherine the Great is one of the most fascinating rulers in history—a monarch whose thirty-four-year reign brought Russia into the modern industrial world, whose affairs were the scandal of her court, and who truly embodied the ideals of the Enlightenment. In Winter Palace by Eva Stachniak you can enter the passionate, intimate, and treacherous world […]