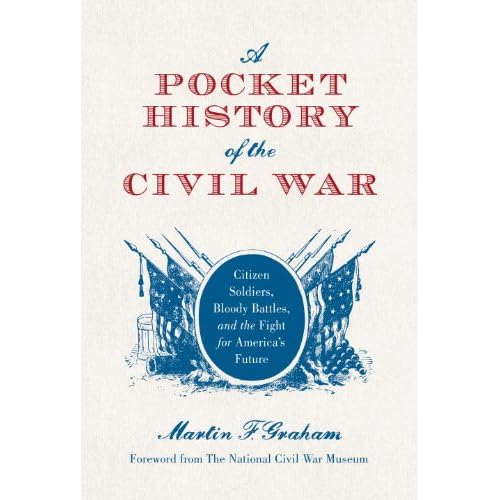 Today, April 12, 2011 marks the 150th anniversary of the first shots fired in the American Civil War.

During 2011 into early 2012 there will be several informative, reflective and accumlative books published to honor the anniversary. Civil War enthusiasts realize that there are still facts, tidbits, and miscelleny they have yet to discover, and are always on the search for more information and facts.

The first book we would like to highlight for you in this year of refelction on the Civil War, is  A Pocket History of the Civil War; Citizen Soldiers, Bloody Battles, and the Fight for America’s Future by Martin Graham.

Martin Graham, former editor of Blue & Gray Magazine has brought together a unique collection of facts, trivia, and stories about America’s defining moment. Published in honor of the 150th Anniversary.

Miscellanies have been defined as ‘collections of useless information that is essential to know.’ This new edition to the genre will satisfy reader lust for Civil War trivia just as sesquicentennial celebrations get underway.

One hundred and fifty years ago the Civil War began…

#FridayReads: Get Excited! Just for You an Exclusive Sneak Peek into Hollow City … The Sequel to Miss Peregrine's Home for Peculiar Children

We’re so excited to be the FIRST to share an excerpt of HOLLOW CITY the long-awaited sequel to the mega bestseller MISS PEREGRINE’S HOME FOR PECULIAR CHILDREN from Ransom Riggs! Click Here to Read an Excerpt of Hollow City. Email us your thoughts on the excerpt, we’d love to hear what you think! Hollow City […]

Why is a book the best gift for this holiday season?  It comes fully charged Around the same price as a DVD, but the experience lasts longer Costs less than a movie (with popcorn!) It can change someone’s life It can make someone laugh It’s a thoughtful gift It’s a personal gift Inspire your patrons to […]

Enter to win a bit of Italy: Every Day in Tuscany by Frances Mayes

Today Erica and I had the great pleasure of attending a lunchtime talk given by renowned travel writer, Frances Mayes. Even if you haven’t read any of Frances’s seven books, you may be familiar with her story as she is portrayed by Diane Lane in Under the Tuscan Sun nearly every weekend on Oxygen, WE, or […]