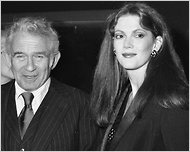 We mourn the loss of Norris Church Mailer, author and artist, who in her own right earned a place amongst our cultural icons while in the glaring spotlight of her famed husband.  The New York Times provides a beautiful tribute and history of her illustrious life and career. Boston! It’s about time you held a city-wide reading program. And we’re thrilled that, for their first-ever city-wide read, Beantown has selected DARK TIDE by Stephen Puleo. It’s a strange, strange story. In January 1919, a 50-foot-tall steel tank filled with 2.3 million gallons of molasses collapsed on Boston’s waterfront, disgorging its contents in a […]

Thank you Publishers Weekly !  Despite working here and being a huge fan of their gorgeous books, I wasn’t aware of the Clarkson Potter history. Happy 50th Birthday Clarkson Potter! -Erica

New movie trailers for The Road and Precious!

Two long-awaited trailers appeared on the Internet this week. (At least I was waiting for them, since I’m responsible for keeping track of that sort of stuff.) The good news is that they both look interesting! There’s been a lot of buzz lately about “Precious,” a film based on the 1997 novel PUSH by Sapphire, […]

Hold on to your book carts! The Knopf Doubleday Group just announced that the long-awaited follow-up to Dan Brown’s mega-hit, The Da Vinci Code, is scheduled to drop this September. The book, titled THE LOST SYMBOL, also features protagonist Robert Langdon. Brown’s editor, Jason Kaufman, says of the novel: “Nothing ever is as it first […]