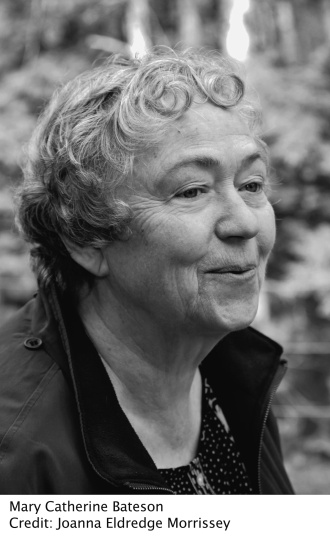 Mary Catherine Bateson sets the stage for her COMPOSING A FURTHER LIFE: THE AGE OF ACTIVE WISDOM (Knopf, just published), that explores a new stage of the life cycle — “Adulthood II”, and reveals the role libraries and librarians played in the process of this creation.

Also by Mary Catherine Bateson, Willing to Learn, which is being re-released this October by Steerforth Press.

A PROJECT SPARKED BY LIBRARIANS:

COMPOSING A FURTHER LIFE: THE AGE OF ACTIVE WISDOM by Mary Catherine Bateson

Where does a process of inquiry start? The project for this book came together in 2006. I had been considering various book projects after completing Willing to Learn, which came out in 2004 and anthologized a number of articles and occasional pieces that I wanted to see preserved between hard covers. That book already contained some of the key ideas in Composing a Further Life, for I had been organizing my thinking around life histories on and off for twenty years and had begun to focus on learning in adulthood. When that book came out, I went through the thought process that many people go through at the beginning of Adulthood II: What skills and knowledge did I have that should be used; and what project using those skills and that knowledge would make a contribution. I had written Composing a Life (1989) because the dramatic change in women’s roles meant that women had to rethink the way they dealt with multiple commitments and discontinuities to live lives of grace, and doing so would involve recognizing and rejecting many stereotypes. I had begun to realize during that project that increased longevity would affect every stage of the life cycle for both men and women, and that once again there were stereotypes to be rejected. “I know how to explore that,” I thought. I have come to realize that rethinking these added years of health will add meaning to individual lives and enrich society.

The next nudge came from librarians. Diantha Schull, of the Americans for Libraries Council, organized a series of summer institutes for librarians, supported by Atlantic Charities, as part of a range of Lifelong Access Libraries/Libraries for the Future projects, which met for several days on the University of North Carolina campus. “Librarians are looking ahead to the retirement of the Baby Boomers, and they want to know how this will affect their programming and policies, beyond getting more large print books,” she told me in inviting me to come and speak. I had recently begun meeting with a group of women created by Patricia Schroeder and Ellen Goodman to discuss the meaning of retirement for feminists who had struggled for the right to work and have careers. As we looked back together on the consciousness raising groups of the 60s and 70s, I realized that “consciousness raising” was needed again, that we were becoming a four generation society. A speaker at a conference used the Phrase “wise activism,” and I flipped it to “active wisdom” and thought: that’s what we need to look for – activism based on the combination of life experience and reflection in the newly available years of health and energy that now precede old age. Individual reflection and group consciousness raising conversation was the way to arrive at active wisdom. And active wisdom, unlike the traditional stereotype of wisdom as sedentary, was what older adults could best contribute to society, because, I worried, we have increasingly been making bad decisions based on short-range thinking: “We live longer but we think shorter.”

Composing a Further Life: The Age of Active Wisdom was modeled on Composing a Life. It is a study based on interviews, my reflections on the interviews, and my own “interviews” of myself to understand my own direction as I approached seventy. It’s not a self-help book in the usual sense, since it doesn’t tell people what to do or offer examples to be emulated. Instead, it is a book for beginning conversations about creative approaches to this new stage of life. If you look out at a rolling landscape of pastures, it’s hard to estimate how far it extends. But if there are a few trees spotted across the landscape or people and animals, you begin to have a sense of scale. That is what the individuals profiled in Composing a Further Life offer – a sense of scale, which is also a sense of possibility, of how far each of us may be able to go, growing, deepening, contributing to a sustainable future for generations to come.

During the period when I was working on Composing a Further Life, traveling around doing interviews, I was continually in and out of conversation with librarians. I made presentations at the summer institutes and at national meetings, including the PLA in 2006, and to regional groups of librarians, and I road tested the concept of consciousness raising groups at the public library in my own small town, Hancock, New Hampshire. Versions of the approach also appeared in two anthologies (see below).

Libraries can play an critical role as men and women rethink the unanticipated gift of time I have been calling Adulthood II, since older adults are accustomed to turning to libraries for information and, increasingly, other resources such as courses in computer literacy, referrals for volunteer work, and reading and discussion groups. But in planning programs it is important to remember that older adults are subject to many negative stereotypes and are often suspicious of programs directed to them, that in fact marginalize them by emphasizing deficits. In public speaking, I have used the titles “What’s Next?” or “In Search of Active Wisdom.” Experience suggests that referring to “older adults” is less off-putting than referring to “seniors” and that “wisdom” is the most positive attribute associated with later years.

Libraries are trusted, neutral spaces where adults can pursue individualized paths of lifelong learning, the most important part of thriving in Adulthood II. Nevertheless, because of the ageism in our society and because of the way health care costs have been emphasized, it is important for libraries to call attention to the fact that we are dealing with something new in human history, which requires casting aside stereotypes and thinking in a new way, and which promises a range of important contributions.

Articles by Mary Catherine Bateson:“In Search of Active Wisdom: Libraries and Consciousness-Raising for Adulthood” in Boomers and Beyond: Reconsidering the Role of Libraries. Edited by Pauline
Rothstein and Diantha Dow Schull. Chicago: American Library Association, 2010

“Please Talk in the Library” in Cambridge Voices: A Literary Celebration of Libraries and the Joy of Reading. Cambridge MA: The Friends of the Cambridge Public Library. 144-147.

Restoring Our Bodies, Reclaiming Our Lives

Restoring Our Bodies, Reclaiming Our Lives, by Aimee Liu is on sale today. This important title takes a closer look at not only eating disorders, but what the recovery process looks like at different stages, and asks the question, “what does recovery really mean?” An essential title for the nearly 8 million Americans dealing with […]

Watching the dance scene from The Breakfast Club always makes me want to get up and dance. Especially when I consider the fun the actors must have had filming – my favorites  are Allison “the basketcase” (Ally Sheedy) and Claire “the princess” (Molly Ringwald) completely letting loose. I’ve often thought it would be fun to visit […]

REMEMBER BACK TO ALA MIDWINTER IN BOSTON….. If you came to ALA Midwinter this past January, and when you came to the Random House, Inc. booth (notice I said when, not if) you might have been lucky enough to have been there when our local sales rep extraordaire, Ron Koltnow, was working in the booth. […]

The Bantam Classics Literary Quote of the Week

Just launched: The Bantam Classics Literary Quotation of the Week! Subscribe today to this weekly blog of memorable quotations from the Bantam Classics Library of great novels. Each week you’ll receive a new selection from one of literature’s great books, as well as a few “fun facts” about the book and author.  Visit […]