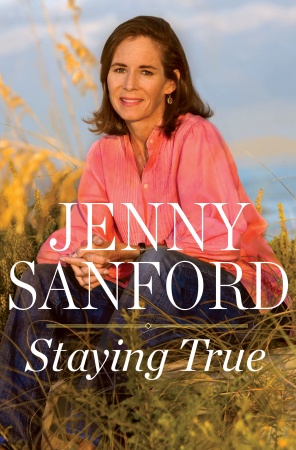 Publishing just around the corner is STAYING TRUE, a memoir by Jenny Sanford, now separated from her affair-having husband, South Carolina Governor Mark Sanford. But before its publication date, Jenny Sanford will be participating in a publicity tour that would make most folks’ heads spin. So be sure to check your advance orders; the demand is likely to skyrocket for this book when it’s spotlighted for the nation’s collective eyeballs. Here’s the highlights from the tour:

In the days leading up to the interview, Barbara Walters will promote it on the following TV outlets:
-Good Morning America
-The View
-Entertainment Tonight
-Extra
-Access Hollywood
(With more to be announced!)

One signed copy of The Sibley Guide to Trees!

Yesterday I had a thrill. DAVID ALLEN SIBLEY was in to sign!! Authors come in often, but rarely is there a line–yesterday there was. I shouldn’t have been surprised because I used my two minutes to remind him of the rock-star signing he did for us in San Francisco during ALA when his SIBLEY GUIDE […]

Boston! It’s about time you held a city-wide reading program. And we’re thrilled that, for their first-ever city-wide read, Beantown has selected DARK TIDE by Stephen Puleo. It’s a strange, strange story. In January 1919, a 50-foot-tall steel tank filled with 2.3 million gallons of molasses collapsed on Boston’s waterfront, disgorging its contents in a […]

Happy National Library Week! The amazing debut we’d like to share with you today is LIV, FOREVER by Amy Talkington! Why this book should be on your night stand: This debut ghostly romance, set at a sinister boarding school, is “spooky, sexy, strange, and shocking,” says Printz and National Book Award finalist E. Lockhart. When […]

Standing Tall in the Basketball Hall of Fame

Along with legend Michael Jordan, Rutgers Women’s Basketball coach C. Vivian Stringer was inducted into the Naismith Memorial Basketball Hall of Fame this week in Springfield, Massachussetts. This recognition is the latest in a list of accomplishments and triumphs for a woman who has faced her fair share of trials. New in paperback, Vivian Stringer’s […]