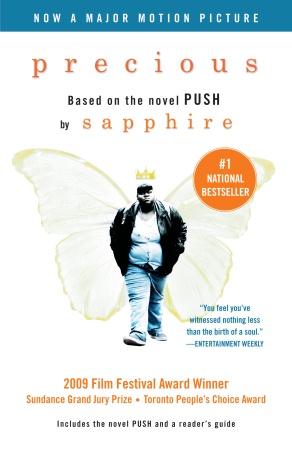 I don’t know if I’ve ever looked forward so much to something so bleak and horrifying. On November 6, a movie called “Precious” comes out, based on a novel we publish called PUSH by Sapphire. (For the movie-tie-in editon, they’ve changed the title to fit the movie)

The film, according to the article in The NYTimes Magazine, received a 15-minute standing ovation at the Cannes film festival, and it also won a Grand Jury prize at Sundance several months ago. The piece in the magazine is an interesting read, and features a cool interview with the director about who has inspired him over the years. Share it with your friends and patrons to generate interest!

VS.   In a bit of an odd scenario, Larry King, having called in for the night, had The View’s Joy Behar fill in for him on CNN on the night where his guest was the infamous and prolific conservative author Ann Coulter. The result, of course, was largely entertaining. Quick-witted ladies both, their verbal […]

Attention all Grandmas, Mimis and Nanas! Lesley Stahl has had many of outstanding accomplishments and experiences in her life. The most transforming experience wasn’t research stories at 60 Minutes or covering the White House, however it was becoming a grandma. Her scientific and practical insights give readers a boundless viewpoint of not only what to […]