For their inaugural “One Book, One City” program, Santa Fe Springs, CA has chosen the increasingly popular Enrique’s Journey by Sonia Nazario as their Big Read. Check out their website; they’ve done a great job centering their program around the book, inviting Sonia to speak and planning a film showing as well. The story Sonia tells is incredible and really takes the lid off some issues facing the people of South and Central America.

This one’s also available in Spanish for bilingual communities. 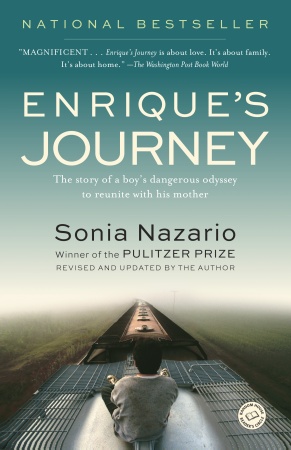 Patti says… "Get Over Yourself!"

For those of you who have been living under a rock and have missed the barrage of hearts, candy and all things lovey-dovey, Saturday is Valentine’s Day. And for those who haven’t quite yet found their Valentine in time for this year’s big day, Patti Novak, top matchmaker and dating coach behind A&E’s “Confessions of a […]

This December we’re closing the year strong with some fantastic reads. Take a peek below to see what we’re recommending. And remember, all books published in December 2014 and January 2015 are eligible for the January LibraryReads List.  Voting for the January list doesn’t close until November 20th,  but don’t procrastinate, more great reads are […]

Today for Libs on Film we visit Sesame Street!!! The Cookie Monster in Library clip is a classic. Our favorite blue monster comes into the library and exclaims “Wow. Look at all these books. Me never seen so many books before.” Cookie Monster after falling over a waste-paper basket and being shh-ed by the librarian […]